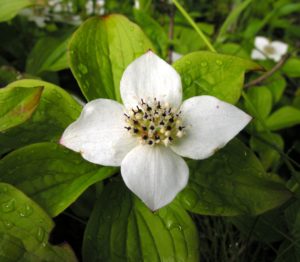 Master Gardeners of Ontario are urging Canadian Heritage to declare the bunchberry as Canada’s National Flower. You can sign the petition to the Government of Canada here.

Bunchberry (Cornus canadensis) was the choice of some 80% of the nearly 10,000 Canadians who voted in the nation-wide contest organized by Master Gardeners of Ontario to celebrate Canada’s 150th anniversary. Bunchberry grows in every province and territory.

Also known as quatre–temps in French and kawiscowimin in Cree, the bunchberry is a one of the smallest members of the dogwood (Cornus) family. It forms a low mat of leaves, up to four inches tall, usually in the understory of moist and shady woods. In late spring, it’s showy white flowers, in fact, modified leaves (bracts), attract many pollinators to the tiny central flowers, including bumblebees, solitary bees, bee flies and syrphid flies.

In summer, the red berries are eaten by black bears, martens, snowshoe hares and other small mammals, as well as many migratory birds. Bunchberry is also a winter forage plant for caribou, elk, deer and moose.

Again, Master Gardeners of Ontario have created an online petition to the federal government to have the bunchberry declared Canada’s official National Flower. You can sign it here.