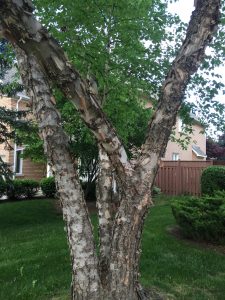 See photo – our Birch tree is approx 25 yrs old. We live in Mississauga, likely with clay soil. It faces north so has part sun, part shade. We have a sprinkler system so is likely not dehydrated. The leaves are green but the bark is hard and doesn’t look healthy. This has been a problem for several years. Any suggestions?

Thank you for contacting Toronto Master Gardeners with your question.

Paper birch (Betula papyrifera) is a fast growing tree which performs best in cool northern climates where root zones are often covered with snow in winter and does poorly in heat and humid areas.

Paper Birch grows well in moist, slightly acidic to neutral pH, cool soils with relatively low organic content and good nutrient content. Betula papyrifera is a full sun demanding species; any limitation in the daily duration or intensity of light will cause a thinning of the canopy and a diminished winter hardening off which results in weakened wood.

Mature paper birch develops black marking on the white bark. Paper Birch trees in their natural habitats peak at 40 years and decline rapidly over the following 30 years. In cultivation in urban environments, senescence can set in after 25 years unless care is taken to manage them well.  Old trees are much more prone to disease infection, are slower to heal wounds, and major limbs and branches die back, usually over winter. The combination usually accelerates the decline of the tree.

According to S.D. Department of Agriculture, ‘A serious threat to Paper Birch planted outside its natural setting is birch dieback. This disease involves the slow death of twigs and branches until the entire tree is killed. It happens when roots become too hot when the soil is not covered by leaf litter. Leaf litter keeps the soil cool and moist, and without this insulating layer the birch roots become too hot and die. As the roots die, the branches receive less water and they begin to die.’

For more information and references: