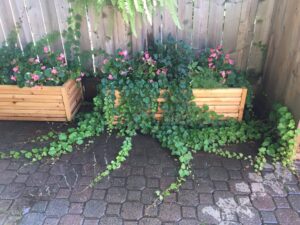 Hello,
I planted to Boston ivy plants in big planter about two months ago (I added some begonias to fill the planters), and they have both grown nicely since then, except for the fact that one of them is growing downwards, not upwards. I would like it to climb over the fence behind it, as well as the shed to the right of it in the photo, but the shoots are all staying down. Is there anything I can do to guide the growth upwards? Thank you.

I’m not really sure why the Boston Ivy isn’t climbing. It has tendrils to twine around things, but it also has little adhesive pads so it can climb wood and masonry. It is usually a very fast grower. You could tie the Boston Ivy up to try to give it the idea to climb. What I would do is put 2 nails in the fence and tie string between them. Put in a few more pairs of nails with string between them above the first pair and then gather the Boston Ivy and bring it under the strings so the strings support it growing up. The strings are arranged horizontally. They ivy will still be loose initially but hopefully some of the little pads will start to adhere to the wood and then everything will be fine. Another way to do it, would be to install vertical strings and then twine the ivy around them. These strings would be more permanent. With the strings horizontally, the stems are not climbing the strings and when the ivy starts to adhere to the fence, you can take the horizontal strings down.

The other thing I wondered about – maybe it’s not Boston Ivy. There are other kinds of ivy, some often used in urns, that trail down, making more of a ground cover if planted at ground level. I looked at your picture carefully, but when it’s enlarged it becomes somewhat fuzzy. I think you do have Boston Ivy, but if you don’t have tendrils and adhesive pads, perhaps not. Here is a picture of Boston Ivy showing the adhesive pads. Boston Ivy is actually not an ivy, but in the grape family and is native to parts of Japan and China. 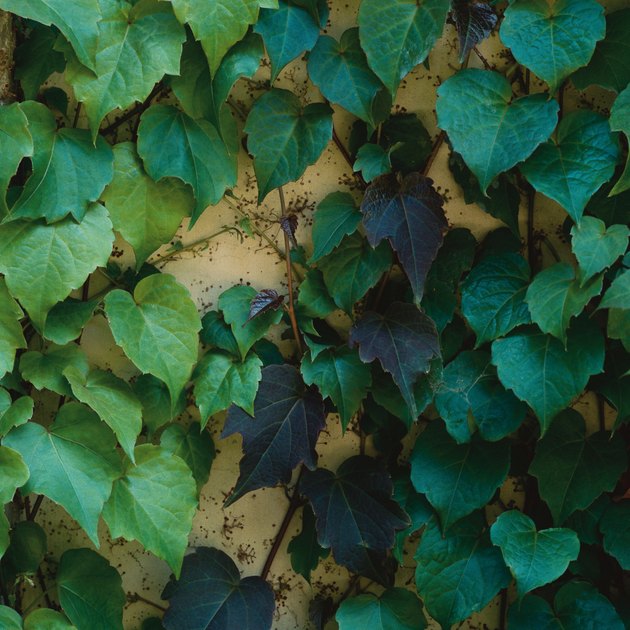