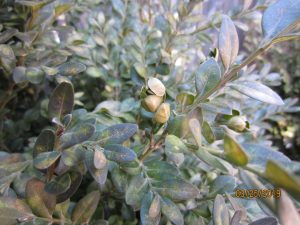 Is there a treatment for boxwood blight? I have three affected shrubs, not dead but definitely diseased.

Boxwood blight is an emerging fungal disease that was first identified in England in 1994 and has since spread through Europe, Asia and New Zealand. It was detected in the US in 2011 and in Ontario in 2014.  The spread is attributed to the inadvertent transport of infected nursery stock.  The symptoms are circular leaf spots with dark margins and black-brown streaking on stems.  As the disease progresses the leaves will drop till the plant is completely defoliated.

The roots of the plant are not affected so if the fungus is detected early you may be able to save an infected plant by removing the diseased portions.  Be sure to disinfect your tools after working with diseased plant material and avoid working with healthy plants after dealing with the diseased ones as the sticky fungal spores can adhere to your clothing and other equipment.  Otherwise, diseased plants should be removed and sent to landfill.  Never compost diseased plants or leaf debris or include in municipal garden waste.

If you wish to replace the diseased plants, be sure to select a resistant variety. One of the most resistant varieties is a hybrid developed in Canada called the ‘Green’ series with cultivars such as Green Gem, Green Mountain and Green Velvet.  You should find these cultivars readily available in local nurseries. Landscape Ontario, the professional association for the horticultural trades has been very active with their members to ensure nursery stock is free of the fungus.

The fungus favours warm, humid weather and shady conditions.  So creating a less conducive environment will help to reduce the spread and severity of the disease.  The following practices are recommended:

I hope your plants may be salvageable or at least you are able to avoid any further spread of this disease.  Good luck.