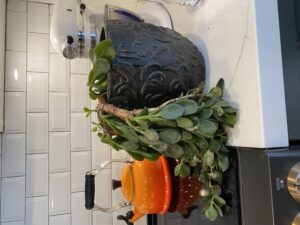 Help Master Gardeners.
My partner has this Jade plant that was given to her by her grandma before she died. The plant really perks up out side, so I left it outside for the summer, and it was doing well. It was looking lovely but I thought I should bring it in because it was getting cold. 10min later it went from a beautiful upright plant to dead – I think it was frozen. Is there anything I can do to salvage it? HELP!!

Because jade plants (Crassula ovata) are a tropical species, they are very sensitive to extreme drops in temperature, as you have seen with your partner’s plant.  The jade plant’s ability to survive a spell in frosty temperatures will depend partly on how long it was outside before you brought it in.  Because it is a succulent, its thick, fleshy leaves are particularly vulnerable to freezing.  We would suggest placing it in a bright window that mimics the sunlight it was receiving outside.   Leave everything as it is for the moment, while the plant has a chance to revive, if this is possible.  You will be able to tell within a week or two where there has been frost damage because the damaged foliage will become blackened and turn mushy.  It is important that you allow this to happen because you will then be able to see where the living branches are.  For example, it looks from your photo as though there are two new shoots, and these may have escaped being frostbitten.

Once you know what is alive and what has perished, you will be able to prune the jade plant back to the living branches.  Cut any frost-damaged parts back to an undamaged branch union, just above an undamaged leaf set, or above a node on a healthy section of the plants stem (nodes are the points on a stem where the buds, leaves, and branching twigs originate).  You can continue to prune as needed, if additional parts of the plant succumb to frost damage later.

The jade plant does have good powers of rejuvenation, and take well to pruning, so if you have been able to save even a small portion of the plant, it should branch out again over the course of a few weeks, and within the next several months should begin to flourish again.

Here are some resources that you might find useful:

Useful general information on the culture of your plant:  https://www.clemson.edu/extension/hgic/plants/indoor/foliage/hgic1507.html