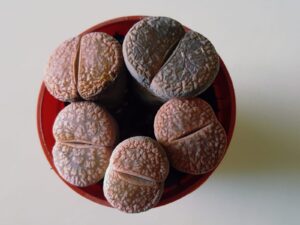 I find lithops very cute but I have been informed by the seller that they never last as they die after their flower blooms. The literature tells me otherwise. Can you please tell me how to take good care and propagate these unique stones so that I can enjoy their beauty for many years in Toronto? Also, how to make their flowers bloom?

Thank you for contacting the Toronto Master Gardeners.

Lithops sp. commonly referred to as “living stones” are native to the deserts of South Africa. In order to have success with growing Lithops at home it is important to take into account their native habitat. These plants thrive in low humidity and need infrequent watering and care. Since these plants live in such harsh conditions they have evolved a unique way of adapting to their surroundings because of their capacity to store water, with almost the entire plant devoted to this function.

When one looks at a lithops, all that’s visible above the ground’s surface is usually a pair of fleshy, succulent leaves that look like stones, with a crevice between them. The majority of the plant is beneath the soil surface and in order to ensure that  light reaches the photosynthetic apparatus of the leaf cells (cholorophyll) that are underground these succulents have developed window-like cells. These cells located on the leaf surfaces allow light deep into the plant to aid in photosynthesis.

These plants require 4-5 hours of direct sunlight during the early part of the day and partial shade during the afternoon. A southern window is the best location, unless it exposes the plants to full sunlight for most of the day, which should be prevented. An unobstructed eastern exposure is a good alternative.

According to the University of Wisconsin-Madison Master Gardener Program “ Lithops require well-drained soil, much the same as cactus. Add sharp sand, perlite, decomposed granite or other gritty material that will help improve drainage to regular houseplant potting mix, or use special cactus potting mix. These plants have an extensive root system, which means they need a larger pot than the plant size would indicate. Pots that are about 3 to 5 inches deep – with drain holes – are recommended to allow the roots adequate room to grow. Place the top of the plant just slightly above the surface of the soil, rather than at the soil surface as would occur in nature.”

The most common mistake made is over watering. Lithops have a yearly cycle of growth, and it is essential to water only during certain stages and to keep the soil dry at other stages of their growth.

The University of Wisconsin suggests the following watering schedule:

It usually take 3-5 years for this plant to begin flowering. Once old enough, the plant produces daisy-like flowers during autumn and early winter. To encourage flowering, add a diluted cactus fertilizer in spring when you begin watering again.

These plants are very slow growing and can remain in the same pot for 10-20 years. Lithops spread by producing  runners. A new plant will come up usually next to the parent plant. Lithops can  be propagated by dividing a multi-headed plant. Simply lift the plant, carefully cut through the roots and replant them immediately.

The following article gives more in-depth information on the growing of this interesting succulent:

A Guide to the Cultivation of Lithops