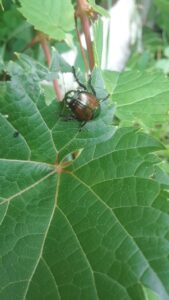 I am new in gardening only 3 years,
since last year i found the all vine leaf/ grape leaf have plenty of holes infected buy that insect shown in attached photo
any idea how to stop this insect from damaging my vine yard

The insect in question is a Japanese beetle, an invasive species which feeds on many types of plants including grape vine leaves.

To control Japanese beetles you can either control the adult or the larvae.

To control the adult beetle, the best method is to go out in the early morning or in the late evening when they are not as likely to fly around, and knock them into a small bucket/jar of water to which you add a few drops of soap) where they drown. This method should be pursued beginning around the end of June, when you first detect the beetles, until sometime in early August.

To control the larva, you can use biological control in the form of nematodes,    microscopic roundworms that eat larva (also called grubs) of Japanese beetles, June bugs and European chafers. These grubs inhabit lawns and garden soil.

Nematodes may be purchased in garden centers or online.

Nematodes are living creatures, and need to be stored and used following the supplier’s instructions. The package you buy will have a fairly short expiry date, a few months or less, and will require refrigeration. Nematodes are typically mixed with water for application.

Nematodes are best applied in mid-August to early September on an overcast morning or evening. The soil must be moist to below the level of the grubs. So, the area to be treated may need a good watering before the nematode application, and afterwards.Unfortunately, there currently are no preventive measures to eliminate these annoying pests.

Best of luck with controlling the Japanese beetles in your garden.