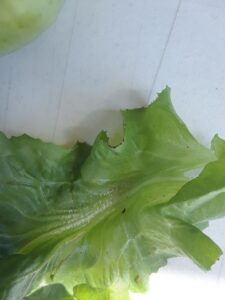 I hope you are doing well.

I was wondering if you can help me with a bit of a worry I have. Last week I was pulling some salad (I believe escarole but not sure) from my garden as I have been doing all summer and I noticed these little critters on the leaves. Some were tiny and black while others were slightly bigger. I believe I saw one that looked partly orange as well. I have been gardening several years now and I don’t ever recall seeing these although I suppose it’s possible I just may have missed then in years past. I was wondering if you might know what they are. I have taken some pictures of them and although they are the greatest pictures I’m hoping you can see them and might know what they are. I am really hoping they are not ticks but I don’t know and was hoping you might know or maybe you can provide some information on where to send these pictures to someone who would know.

Any help you can give would be greatly appreciated.

Thank you and stay safe.

Keep up the great work.

Thank you for your kind words.

Unfortunately your picture is not clear enough to enable identification of the creature on the leaf.  There are some very small black insects which can be found on plant leaves.  Some of them, such as the flea beetle, cause damage to leaves, although the damage is typically small holes in a leaf rather than chunks eaten of the leaf margin, such as in your photo.  The damage on the leaf looks as though it might be from slugs, rather than the insect pictured.  You could trying sending us a clearer picture (larger view of the creature ) which might allow identification.

Your main concern seems to be that the creature on the leaf is a tick. This is unlikely as ticks are typically found in moist shady areas (such as leaf litter or brush), not on sunny leaves of plants growing in the vegetable garden.  As well, you should note that ticks are members of the Arachnid family – like spiders – and have eight legs.  Insects, such as the flea beetle, have six legs.  You might try examining the creature to determine whether it has six or eight legs to help determine whether it might be a tick.

Here is a link which contains very good pictures of insects which are mistaken for ticks, which might help you identify the creature yourself:

Note that Ontario Public Health has service though which it identifies ticks that are sent to it in accordance with the required procedures.  Unfortunately it does not provide this service for ticks collected from non-human sources – i.e. leaves of plants.