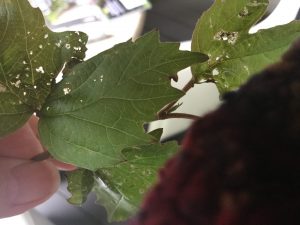 Can you tell me pls what this is. 2 days ago my viburnum Onondaga was fine and today it is covered in tiny holes and looks like the leaves are dying.

Thank you for contacting the Toronto Master Gardeners regarding your ailing Viburnum.

From your photo it appears that your Viburnum is being attacked by the Viburnum Leaf Beetle. The following information is from one of our earlier posts:

The eggs of the Viburnum leaf beetles (VLB) overwinter in twigs, and hatch in May as larvae.  Given the timing, it is the larval stage of this insect that you have observed.  The larvae feed on the leaves of the plant, and in June, move into the soil to pupate as you have observed, with adult beetles emerging in late July.  Female beetles lay their eggs from late summer until first frost by depositing them in holes they chew in small twigs on the plant.

Ideally the life cycle of this insect should be stopped, or slowed, in the late fall or early spring, before the larvae hatch, by closely examining the small twigs from last year’s growth, checking for egg sites, and pruning out the affected wood.  The appearance of these egg sites is described by the Ontario Ministry of Agriculture here.  On your Viburnum, this season’s larvae are now making their way into the soil around the plant.  The Ontario Ministry of Agriculture also notes that two to three years of defoliation may kill an affected Viburnum.  A previous Toronto Master Gardeners post on this subject,  https://www.torontomastergardeners.ca/askagardener/killer-bugs/ provides more detail on the life cycle of this insect pest, and also notes some of the insect predators of the Viburnum leaf beetle.

Certain species of Viburnum are more resistant to the leaf beetle than others.  Here is a website that lists these: https://www.hort.cornell.edu/vlb/suscept.html .  If yours is susceptible, you may want to consider replacing it with another plant entirely, or with a Viburnum from the list of resistant varieties.  In either case, it is advisable to clean up by removing all dead wood or leaves and putting these into the City’s pickup rather than into your home compost which will not heat up sufficiently to destroy any pupae or emerging adult beetles.

An excellent guide to the identification of VLB is https://entnemdept.ufl.edu/creatures/orn/beetles/viburnum_leaf_beetle.htm

Unfortunately, your ‘Onondaga’ viburnum (Viburnum sargentii ‘Onondaga’) is on the list of susceptible viburnum but careful pruning and sanitation may help.  Good Luck!