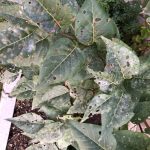 I have 2 lilac trees which are about 4 years old and have been doing great. This summer after the trees bloomed I noticed the leaves on the trees were being eaten. I finally discovered tiny green worms crawling on the leaves and I don’t know how to get rid of them. I believe these little worms are eating the leaves. Both trees are in flower boxes 1 in the back yard and one in the front yard near the house. The soil is very hard like clay but in both sections the soil was dug up and replaced with good soil as far down as possible. I live in Nobleton Ontario. Both trees get good sun and are otherwise healthy except for the holes in the leaves. I recently tried to spray the tree trunks and leaves with dawn dish soap and water to see if it would kill the bugs but it doesn’t seem to be working as I have seen more worms since then. Please offer any advice you can!!

At this time of year, it is not unusual to see lilac leaves that appear to be almost entirely white.

The whitish appearance is usually caused by a powdery mildew fungus. The fungus loves lilacs and usually starts to show up in mid-summer and begins spreading into late fall. By the end of the summer, some of the leaves may appear to be entirely white.

The fungus is usually not fatal to the plant, but if you don’t like the look of it there are a few things that you might try.

On your two established container plants, I would recommend removing any dead leaves in the fall. This will help prevent overwintering of the fungal disease. Next year, as a preventative measure, you can try removing any infected leaves that show early signs of the disease.

The disease thrives in shady, damp and dense settings, so I would also recommend improving air circulation around the plant. Since they are in containers, perhaps try moving them away from the house where there is more sunlight and air movement. You can also try improving the soil drainage or watering a little less so that the soil can dry out a bit between waterings.

Now for the little green worms. It’s hard to say exactly what the worms are, but from the shot hole appearance of the holes in the leaves and from the time you first spotted them, I’d say they most likely are Cankerworm (spring and fall).

The recommended control for this is tree banding. Tree band in early spring and from late September to November. The bands are covered in a sticky adhesive and trap the insects. There are a variety of other pest that attack lilacs, such as leaf miners and borers but the holes look more like cankerworm.

Whatever the case, I would recommend picking off the worms and dropping them in a bucket of water.

Good luck with your lilacs.