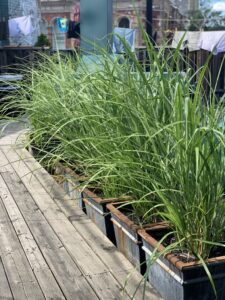 I planted silberfeder in containers in the spring and they have flourished. The clumps I bought were already a few seasons old so I had significant growth this year. I planted in a 3 in 1 and topped with mulch. I’m a little surprised that it’s already mid-august and no plumes are growing. I’ve read that this could be due to a possible excess of nitrogen and that adding mulch could help. Would I just be adding the mulch on top or should I try my best to mix it in around a little deeper? Could there be any other reason the grass isn’t going to seed yet?

Hello – Your Misanthus silberfeder looks really healthy so you have obviously been supplying what it needs.  It blooms in the late summer/early fall so it has some time yet.  Have you been adding fertilizer with a high nitrogen content over the summer?  If so, it could be promoting stem growth at the expense of the flowers as you suggest.  However, the frequent watering required of plants in containers typically leaches out excess nitrogen over time so I wouldn’t take other action – other than to stop fertilizing.

When a perennial is planted in the ground, it may flower poorly  in the first year as the plant is directing it’s energy to building roots. Gardeners are often encouraged to cut off any flowers when planting a new perennial for this reason. Even though your plants were a few season’s old when planted in your containers, I’m wondering if the lack of bloom is the plants reaction to it’s first year in a new environment.  You don’t mention whether you plan to overwinter your plants in the containers but I’m assuming that is the case. If so, you’ve given them a really good start and you should expect a better bloom next year.