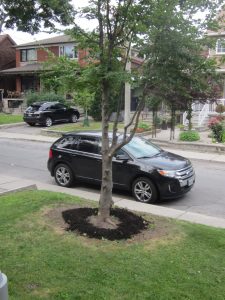 I lightly circled my neighbour’s European Beech tree with compost on the weekend and had another question around the best texture of mulch topping the compost.
To determine that area to cover with additional mulch, I estimate that I would need 27 square feet of mulch. Having only 100 litres of fine cedar mulch, I think I can barely cover that area to a depth of only an inch, but I’d like to try it, just because I’ve never done this.
For a geometrical shape, what I see doesn’t seem to translate into what I think I can cover, as I discovered with the 50 litres of compost I barely circled the tree with, partly because the shape was an ellipse, not a circle. The 100 litres I have are pest-resistant, and aromatic, and makes some claim about spreading 30% more than other brands.
If the cedar mulch is too fine, wouldn’t it be better to purchase a coarser product which will last longer, and not blow away, in West end Toronto, coating the composted circle, and especially to a greater depth as suggested?
I expect a dry August, and the finer product will be watered weekly with the lawn.
I can even purchase a different colour of coarser mulch when I add more mulch on top, without any worry about mulch blowing onto the sidewalk. Thank you.

It can be surprising how much compost and mulch is required to adequately cover garden beds and around trees. If you have a limited quantity of compost or mulch, add it to the middle third of the area within your trees drip line. Its better to have two inches of compost and two inches of mulch over a smaller area, than the entire area covered with a thin layer of an inch or less.

The mulch you describe may not be ideal. I wonder how they make it pest resistant? They may be counting on the fact that cedar naturally repels ‘insect pests’, when used dry in linen closets and chests. When garden cedar mulch ages it rots and many insects help to accelerate this process by eating the decomposing mulch. This process eventually releases nutrients and fiber into your soil, which in time helps to improve the soil quality.

Mulch shouldn’t blow around. If its too thinly spread it retains less moisture- which provides less moisture for the tree. If it is too finely shredded and thinly applied it can blow away. Thin compost and mulch layers provide less nutrients and water for the tree and allow for more weed growth.

Coarse mulch is not ideal either, especially if applied thinly. The large chunks sit on the ground surface with large air pockets between mulch particles. These large air pockets allow the cedar or pine chunks to dry out easily and as a consequence, they take many more years to break down and condition the soil. The dry chunks allow weeds to grow in the gaps and provide little moisture retention.

Coarsely shredded natural mulches, without chemical dyes added, are the best option. Aim for about 2 inches thick. To improve the aesthetics of a donut of compost and mulch around the tree, you can sprinkle a thin layer of mulch on the inner third within the drip line- taking care to keep it several inches away from the trunk of the tree.

I hope your neighbours tree enjoys your kind deed!