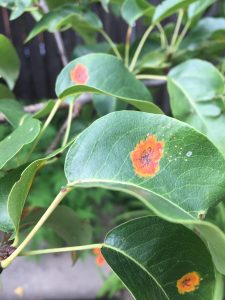 These leaves are on our tree in North York.
Are these pear rust?

Unfortunately, pear rust is now a very common disease in southern Ontario. It appeared about 10 years ago and over the years Toronto Master Gardeners have fielded numerous questions on this topic.

“The first signs on pear are bright orange spots on the leaves in late May. The spots enlarge during the summer reaching a diameter of 1-2 cm. By late June, numerous black dots (pycnia) develop in the centers of the spots on the upper leaf surface. In July and early August, the infected area of the leaf becomes thickened and wart-like as spore-producing structures (aecia) push out from the lower surface. From late August through to leaf drop in the fall, grey hair-like projections emerge from the lower surface and release spores. These spores are capable of infecting junipers.” Pear Trellis Rust in the Home Garden

We receive numerous questions concerning this disease. Please visit our website at www.torontomastergardeners.ca  for information. On the right side of the screen under Find it Herethere is a search box. Type in pear rust and press enter. A wealth of information will appear in the form of articles on this topic for you to read.

The following information is from one of our earlier archived posts:

Pear Trellis Rust is becoming more and more common. It is a relatively new fungal disease in Ontario, first recorded in 2007. Unfortunately, it can be difficult to treat in urban settings, simply due to population density. It’s caused by the fungus Gymnosporangium sabinaethat hosts in winter on junipers (although some junipers are resistant). In spring, the orange, gelatinous fruiting bodies (telia) emerge – usually after a rain – and mature to spread wind-borne spores over many kilometers. Some sources suggest the spores can carry for as much as 2-6 km. The spores alight on pear leaves, including those of ornamental pears, and then complete their spring and summer lifecycle – in their turn infecting or reinfecting junipers. And the cycle begins anew.

Advice is often to remove either the pear or the juniper, if they are spaced closer than 150 m (450 feet). In fact, the recommendation is to keep the two alternate hosts at least 1 km apart. within a 1-km radius.

The Ontario Ministry of Agriculture and Rural Affairs (OMAFRA) has an excellent fact sheet on Pear Trellis Rust.

On the pear trees, it’s the leaves rather than the wood that play a role in the lifecycle of this fungus. However, do try to gather up and dispose of any fallen pear foliage and fruit; do not add them to your compost. One suggestion is to pluck them off the tree before they fall, but this is impractical for widespread infection.

While there are no fungicides specifically approved for Pear Trellis Rust, OMAFRA suggests that other fungicides might help minimize the impact on your trees. Look for those used to treat other Gymnosporangiumrusts, such as cedar-apple rust.

If ever in doubt about a tree problem, it’s always wise to seek out a certified arborist for an on-site consultation. Try the Landscape Ontario website to locate an arborist near you. Click here.

Wishing you the very best of luck with your pear tree.