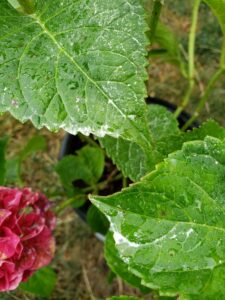 Hi. I am a beginner in gardening. I recently purchased the hydrangea in the picture, and some white powder-like markings appear on its leaves. I suspect that those are mildew, and had used Safer’s 3 in 1 Garden Spray Fungicide on it. Nevertheless, the white powdery markings are even more “concentrate” on the next day, after applying the fungicide. Is this normal to have more “concentrated” markings after applying fungicide? Any other disease beside powdery mildew has the same symptom? Can the powdery mildew or disease be cured? Thank you

This does look like powdery mildew, but you may want to take a few additional photos to your local nursery to see if they can confirm that this is the case.  Several different types of fungus can be responsible for powdery mildew, which is not uncommon in hydrangeas.  See Penn State Extension’s Hydrangea Diseases.

It looks like you noticed the powdery mildew and treated it quickly – which is a good thing for the plant! The fungicide does not act immediately, it likely will take 3-4 weeks to show full effects.  Make sure that you apply the product to all areas of the plant, including the undersides of leaves.  I don’t have an explanation as to why the white powdery markings were even more evident the day after you applied the fungicide.  These markings should disappear over the next few weeks.

The product you mention contains potassium salts of fatty acids and sulfur, and is promoted as a fungicide, insecticide and miticide, so can be used for several types of diseases/infestations, including powdery mildew.  Follow label instructions, which indicate that the product should be re-applied after rain, every 7-10 days or “as needed” to control powdery mildew.    This usually means at least once a week for up to 4 weeks – you should see results by then.  You can reapply the fungicide every 2 weeks (or according to package label) to prevent further outbreaks.

We’ve had some very warm humid days lately, conditions that – along with deep shade – powdery mildew loves!  We can’t control the weather, but we can try and keep the plant as healthy as possible through good cultural practices.  Here’s what you can do:

Finally, while powdery mildew does not usually kill hydrangeas, if left unchecked it will weaken the plant, so that it will not thrive.