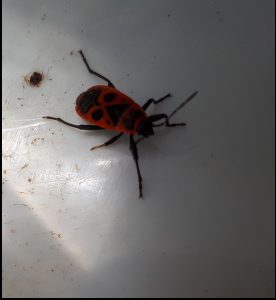 I live in Toronto and have recently found a strange orange and black bug in my back garden. It seems to prefer my herb garden and seeks shade, although the bugs run around in full sun too. I have identified it as Scantius aegyptius, known as red bug, an invasive species in North American that seems to have first been found in California. I have not found any mention of it being in Canada. It appears to be reproducing, as the size ranges from tiny to about 1 cm max. I want to avoid using insecticides in my herb garden so am looking for other ways of getting rid of it (I have been squashing as many as I can). I’m assuming it arrived in either a plant or bags of mulch or compost I’ve bought, since I’ve never seen it before. Also does anyone know if its bites are dangerous? Thank you for any information you can provide.

What an interesting looking bug.  Other Toronto gardeners have noticed this bug in their garden and post to Toronto Master Gardeners about it.  You will be pleased to know that its bite is not dangerous, as apparently it it does not have the mouth parts required for biting!

Here is a link to the response to a previous ASK question which discusses Scantius aegyptius, also know as Mediterranean Red Bug, including how to deal with it,  in detail: