Hi master gardener,
The last few years my burning bush has had curling leaves at the tips. This year whole branches have crispy brown leaves. These appeared suddenly. Two weeks ago they were green. It’s in a sunny, south facing garden in sandy soil. I also noticed this year some brown spots on the leaves. Do you know what’s causing this and if there’s anything I can do? Your help would be greatly appreciated. 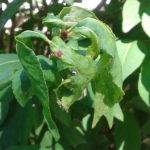 When I looked at the picture you sent, I initially though the problem might be bacterial leaf spot disease because of the appearance of the spots. Bacterial leaf spot diseases often start as small dark brown to black spots with a halo of yellow tissue surrounding each spot. They won’t kill the plant directly, but gradually weaken it by reducing photosynthesis in the affected leaves.

Then I reread your note and noticed you said the disease is causing the leaves on whole branches to turn brown. Then I thought the problem might be verticillium wilt. Verticillium wilt is a disease that often shows up with sudden die-back of one large branch, or 1/2 of the plant. It must be confirmed with lab tests but it usually progresses rapidly and often results in the death of the plant. It is caused by soil borne fungi and there is no definitive treatment except encouraging the overall health of the plant and eventually, if it dies, planting resistant species. What you can try to do about verticillium wilt is cut off the dead branches back to living wood.

Finally, random branch dieback can be attributed to many things such as root rot or last year’s drought.

You should also check to see if there is any insect activity on the plant. Here is an article from Iowa State University that describes the most common insect pests of Burning Bush, and offers some treatment strategies:
https://www.extension.iastate.edu/news/2006/jun/070901.htm

I hope this has been helpful. It is hard to diagnose diseases online from one picture. Good luck.