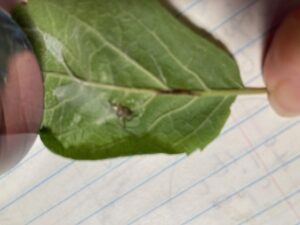 Hi, a few weeks ago, I asked this question:
I have a very shady front garden in central Toronto. In recent years, my hydrangeas have been attacked by what I think are spiders (I’ve never actually seen them) that make webs inside the hydrangea leaves so that the leaves curl tightly around the webs. See photos 1312 and 1313.
This year, the webbing has spread throughout the garden, especially affecting my English ivy, which grows as ground cover and also climbs up my very old silver maple. See photos 1307 and 1308.
Do you know what is making these webs, and how I can solve this problem?

I was advised that I probably had spider mites. However, these webs continue to plague me (and many of my neighbours) and they’re not just on plants but on everything else in the garden, including furniture, pots, and many other non-living things. Concluding that they’re not spider mites, I opened one of the curled-up leaves on my hydrangea and found a small whitish spider – about 1/4 inch and much bigger than a mite. (photo of the squished spider attached). Do you have another guess as to what it is?

Thanks again for your help.

Sorry to hear that this is still an ongoing problem. From your initial description of webs inside hydrangea leaves my initial thought was the hydrangea leaftier larva (caterpillar) which binds two or as many as four leaves together with strands of silk into a cup form and then feeds and rests between them. Pulling the leaves apart will reveal a slender greenish caterpillar up to one-half inch long with a blackish head. After it stops feeding, the caterpillar will drop to the ground to pupate over the summer and emerge as an adult moth the next spring.

A different insect that causes similar damage is the leafroller. In this case, the caterpillar rolls or folds only one leaf, binds it with strands of silk, then feeds and rests within the rolled or folded leaf.  Depending on how many leaves are fused together will determine which of the two pests are the culprits.

If this is in fact what is causing the damage to your hydrangeas then even though the damage is unsightly it will not destroy the shrub. Because it occurs early in the spring, if you remove the infested leaves and smash the caterpillars, the plant will have time to grow and flourish over the summer. Make sure to clean up the ground below the shrubs very well.

You mention that you are seeing the webs on your English Ivy. Spider mites are not actually insects, but they can cause considerable damage to English ivy and other plants. These members of the Tetranychus genus form large colonies on the lower sides of leaves and drain juices from the plant, creating tiny, yellowed, stippled spots on the foliage, and they spin unsightly webs across the leaves and stems. Severely damaged leaves turn brown and fall from the plant.

However, this does not solve the mystery of what could be causing the spider webs that you are observing over your furniture. My suggestion would be to take the plant leaves and culprit into your local garden center where they have experts that might be able to help you with your problem.