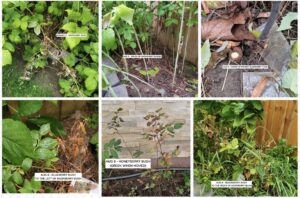 About a month ago we had to prune and ultimately destroy a pear tree that a Toronto Master Gardener confirmed (by its description) was in the early stages of pear blight. The tree was located right next to these berry bushes.

The bushes are located in full-partial sun on the south-facing side of our house in mostly clay soil, but there have never been puddling issues. The honeyberry bush in question had been planted there as well, but was moved last week to an area with dappled sunlight. Usually these bushes get watered several times during the week.

We were away for part of July and our sprinklers were moved during the worst of the July heat wave. It’s been a few weeks of good water since, but I don’t know if the brown leaves/branches are just because of sunburn/dehydration. Additionally, I don’t know if the raspberry canes are just dying because it’s the end of their three-year cycle and this is what that looks like.

The affected area is a huge part of my garden and I’m a little overwhelmed trying to figure out what to do. Please help!!

Thanks for contacting us about potential disease on your berry bushes.

It is extremely difficult for us to make a diagnosis of the problem on the basis of pictures and without information on the specific variety of bushes you have, especially with regard to the raspberries.  Additionally, what appear to be labels on the pictures are not legible.

There are various factors which each may be a sole cause or acting in combination to cause the problems that you mention, including our excessive recent Toronto temperatures and drought; inconsistent watering; overhead watering (rather than watering at the base of the plants); some natural dying off caused by weather, or the plant’s life cycle, etc.  You also mention very recently moving the honeyberry bush.  The height of summer is not an ideal time to transplant shrubs even in summers with more moderate temperatures and adequate rainfall than we’ve experienced this summer.

It may also be insect pests that are are part of the cause, since they tend to attack plants already weakened by some other problem such as drought, overwatering or disease.

You mention that your pear tree was diagnosed with blight.  However, fungal and bacterial diseases don’t generally move from one genus of plant to another, so the pear disease may not be relevant, since pears and berries are not related.

The following links may help you diagnose the problems by comparing the symptoms on each of your berry types to the symptoms described for each disease and the accompanying pictures.  They may also help with amending your existing growing conditions to improve success with these plants whether your plants survive — or they succumb — and you wish to replant.

http://omafra.gov.on.ca/english/crops/facts/99-033.htm (OMAFRA Fact Sheet on Raspberries and Blackberries for the Home Garden)