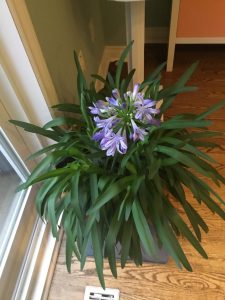 I live in downtown Toronto. I have an agapanthus that is 3-4 years old. Each year it blooms less and less and very late in the season ( my one enormous bloom is starting to die back now on November 11). I did put it in a new pot last season that it fills . The forst year I brought it in, it bloomed in the winter ( January). The greens do die down. Right now it is in a west facing window. When the bloom dies and the greenery starts to deader, what should I do with it? It is in a large pot and quite heavy. I would rather not have to move it too far. What do you suggest?

Agapanthus is a beautiful plant originally from Africa. It has gone through many different classifications over the years. It was put in the lily family at one point and moved through several other families before being classified in it’s own group. It grows from a rhizome that is very frost sensitive.

There are two ways to over winter the plant. You can dig up the rhizome, clean off the dirt, wrap in newspaper and store in a cool dry place. Another option is to keep it in the pot in a dark cool spot and to let it dry out. When you are reintroducing it back outside next year you should acclimatize it slowly and be careful of late frosts. One note from your picture is to be careful having the plant close to the heat vent as that can damage plants.

I am including two resource links below for you to further read about this plant. Good luck, I hope it performs well for you next year.