OMAFRA (Ontario Ministry of Agriculture, Food and Rural Affairs) has just released an advisory on this subject. They report  that this year, as in 2016, black marginal necrosis  is appearing on the newest growth of pear (Pyrus) trees.  In 2016, after several attempts at culturing pathogens failed, they determined that the necrosis was the result of extreme weather. 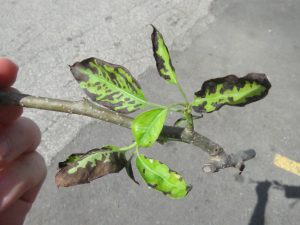 Southern Ontario has experienced sweltering heat and humidity again this summer. Ten out of the last 23 days in Toronto have been recorded to exceed 30 degrees C.  Those extreme temperatures  take their toll on plants, especially newly emerged foliage that hasn’t developed a thick protective cuticle yet.  In the pear industry, this marginal leaf necrosis is known among farmers as “pear blast” and is common on foliage that emerges during high heat and humidity.

The phenomenon usually lasts only a few days and will not worsen or spread to other healthy foliage.