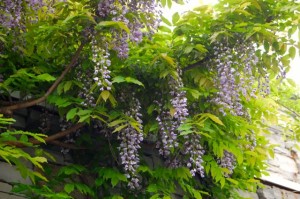 A wisteria vine makes a spectacular statement in the garden. In its glory this robust vine flaunts numerous cascading clusters of sweetly scented flowers reaching up to 36” in length. Naturally nothing is more frustrating to gardeners when their wisteria fails to bloom.

A wisteria may take several years to mature before it comes into flower but consistent failure to bloom can be attributed to several factors. For instance, a vine grown from seed can take up to ten years or more, if ever, to flower. Other potential explanations include too much shade, incorrect fertilizing, poor quality or juvenile plants. Flower buds can also fall victim to late spring frost. Most often though wisterias failure to bloom indicates the vine suffers from improper pruning techniques.

With proper selection and care gardeners will be rewarded with a profusion of flowers each year.

One way to guarantee flowers on a wisteria is to select a specimen in flower at the time of purchase.

Wisteria floribunda ‘Black Dragon or W. x formosa ‘Issai’ are known for their floriferous habit. Flower buds are set on previous seasons growth and are therefore vulnerable to late spring frosts. They may benefit from a protected location away from harsh winter winds.

Avoid gambling on flowers with a wisteria planted from seed. Seed grown wisterias are not only unpredictable in their bloom, they notoriously have a longer than normal juvenile period. Use only varieties that are grafted rather than seed grown as grafted varieties typically bloom within three years. Cuttings from a reliable bloomer are also a good choice. 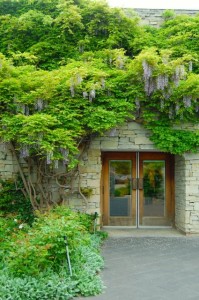 The most reliable way to ensure a wisteria blooms each season is to establish a regular pruning regimen. Improper pruning may overly stimulate vegetative growth at the expense of flowers.

Dedicated pruning twice during a season not only keeps this robust vine confined to its support structure, when done properly, it establishes a framework of horizontal branches and promotes the formation spurs at controlled intervals. Flower buds are produced on spurs and pruning induces spur formation.

With correct pruning the number of spurs will increase over time until a significant cluster of flower buds is formed. Spurs usually live for eight to ten years before rotting and falling off to be replaced by others. Even wisterias that are allowed to ramble informally flower markedly better when spur-pruned.

Wisteria floribunda and W. sinensis buds are set on spurs in the fall and bloom in the spring so cutting any of these unnecessarily will compromise the number of flower buds.

Horizontal branches are more likely to flower than vertical ones. Keep this in mind when establishing the basic framework of a young wisteria. Aim to have a strong vertical stem, which serves as the main leader and direct side branch (lateral) growth at a 45-degree angle. Pinch off the main leader when it reaches the desired height. Do not allow suckers to sprout off the main leader or grow out at ground level. Lateral stems should be spaced at least 18 inches (45cm) apart to allow room for the blooms to dangle down without running into each other.

The end goal in pruning is to allow the permanent framework branches to extend each year by half the annual growth and for laterals to become flowering spurs.

A twiner is a long, straight, thin branch; about as thick as a pencil at the thickest and it will grab hold of what ever it finds and then twine around it. In the summer, prune these back to two buds. This is spur-pruning and stimulates creation of more spurs that will be covered in bloom in spring

All other lateral shoots (runners) are either cut off completely (and there are lots and lots of these) or shortened to about four or five leaves (6in or 15cm) if they are wanted for flower production.

The only thing on a spur should be plump flower buds. Any shoots coming off the spur should be removed. These shortened shoots will become flowering spurs.

In mid July, early August or two months after flowering, prune all the twiners that sprouted from the basic framework back to one or two buds. Each of these cuts will produce a spur covered with bloom. Lateral shoots are pruned to within 4 to 6 leaves (6in or 15cm) of the main branches again to form flowering spurs.

Cut un-pruned horizontal leader shoots back by one-half their length. Re-cut lateral shoots pruned the previous summer back leaving only two or three buds (3in or 8cm) for short flowering spurs. Remove any shoots coming out of the spurs.

In winter, prune away all but a framework of branches. Shorten these to within the supporting structure, remove crowded and poorly spaced branches and retain the vine as described above. Hopefully, the plant will bloom within two or three years.

Root pruning a mature vine might be considered if other methods fail. A mature wisteria, that is reluctant to flower, may be shocked into action by root pruning in early spring. Drive a sharp spade vertically into the soil. Slash only a few times around the wisteria at a radius of about two feet from the main stem.

In spring, feed a newly planted wisteria with superphosphate (0-20-0), following the recommended application rate on the label. Established vines are best left unfertilized. Slight stress will force the vine to produce flowering buds.

Keep the plant well away from lawns that might be fertilized with high nitrogen content fertilizers, as the vine will produce lush foliage at the expense of blooms.

Too much water will encourage excessive leaf production at the expense of flower bud production.

Wisteria is a strong plant. A mature wisteria can crush a trellis and push drainpipes away from a wall. Resist the temptation to tuck shoots behind pipe work. Keep eaves, roof tiles, and widow ledges free from runners. Regularly check the integrity of the materials used in the support structure. Repair or replace any section that may jeopardize its overall function.

Make sure to plant the wisteria in a location that will meet its cultural needs: Wisterias are hardy to Zone 4; however, the buds are susceptible to cold and may be nipped by a late frost.

For printable version, click  How to Get Wisteria to Bloom- A Toronto Master Gardeners Guide

Produced by the Toronto Master Gardeners, these Gardening Guides provide introductory information on a variety of gardening topics.

Toronto Master Gardeners are part of a large, international volunteer community, all committed to providing the public with horticultural information, education and inspiration.  Our goal is to help Toronto residents use safe, effective, proven and sustainable horticultural practices to create gardens, landscapes and communities that are both vibrant and healthy.

If you have further gardening questions, reach us at our gardening advice line 416 397 1345 or by posting your question here in the Ask a Master Gardener section.  To book Toronto Master Gardener volunteers for talks, demonstrations, advice clinics, or other services, please contact us at 416 397 1345  or bookamg@torontomastergardeners.ca