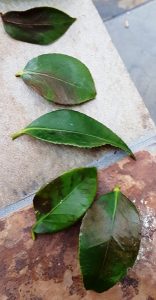 This is a challenging question. For two years now, my 40 year old Camellia has its older leaves (last year / second year) develop these brown patches and fall off. Plant was re-potted, is in a sunny location – but not a scorching one, watered regularly but not overly, is fed with an acid fertilizer as needed. Can you assist? Is this Phytophthora?

This response deals with the first issue you describe concerning your beloved camellia plant.  It is very odd that your camellia has done well for 4 decades, then suddenly the brown blotches appear on the leaves, and the leaves drop off.  The good news is that whatever is going on, it sounds as though your plant continues to thrive to a significant degree. I don’t think this is phytophthora…

Here are a few issues for you to consider:

Is it a pest or disease?

To prevent phytophthora and other diseases, plants should not be repotted in containers that are too large as spots where soil is not used could become too wet and compacted, which promotes root rot. When repotting, ensure the new pot has been thoroughly cleansed and use new potting mix.

Finally, be vigilant in removing plant debris from around the plant, to discourage pests and diseases.

Is your plant happy in its environment?

Generally, our homes may be too warm, dry or dark for camellias to grow well.  However, if you have kept your plant inside for 40 years or so, it is puzzling as to why the plant suddenly seems to have protested.  The key may be that it was stressed when it was repotted recently.

Re-potting can be an issue.  Ideally, if your plant has reached the size you want it to be (and likely after 40 years it has), the new container should be same size as the last one.  Roots should be trimmed 2.5-5 cm (1-2 inches).   A well-draining potting mix (there are commercial ones for camellia/azalea) should be used.

Presumably the plant is in the same location as before, so issues like draftiness and excessive sunlight are not an issue.  Let’s examine basic requirements for camellias:

Soil:  Soil must be well-draining, with an acidic soil pH of 5.8-6.5.  If the soil is too acidic or alkaline, the plant may not be able to absorb adequate nutrients.   The soil should not be too compacted, as this could decrease the amount of oxygen that reaches the roots.

Water: It sounds as though you are not watering too often, but note that it is best to water deeply when the top 5-10 cm (2-4 inches) of soil feels dry. This is preferable to more frequent, shallow watering – for one thing, it leaches away excess salts that could contribute to browning of leaf tissue.   Be careful not to over-water, which could lead to root rot.

Do you spray water on the leaves?  This might be a good idea, as it has been a dry winter (it’s now the end of February) and it may be challenging to achieve the high humidity levels the plants need in order to thrive.   Some experts recommend a cool-mist humidifier. [This is very different recommendation from that made above if the culprit is the leaf blight fungus – in that case, leaves should be kept dry]

I’m not sure if you use hard water, which contains calcium and magnesium salts and may be quite alkaline, so could raise the soil pH (as you note, camellias like acidic soil).  Allow tap water to stand for at least 24 hours so that the salts settle and chlorine evaporates.

Fertilizer: Camellias don’t need a lot of fertilizer, and their roots are close to the surface.  Select a fertilizer recommended for camellias and use it frequently (according to package directions) throughout the growing season, i.e., once new shoots appear – April through September.  A dry plant should not be fertilized; always water a day prior to fertilizing. The plant should not be fertilized when it is developing buds. Too much fertilizer could cause browning around leaf edges or even the entire leaf.  If this happens, water to flush out excess nutrients.  I don’t believe that the browning leaves in your photo are from excessive fertilizer. I’m not sure what you mean by “as needed” fertilizing.

The American Camellia Society had a number of helpful articles that you can access via links on their website. These include Container grown camellias,  Insects and diseases and Camellia root rot (this last article discusses phytophthora).  The Society  also hosts a facebook page – you may want to post your questions to them!