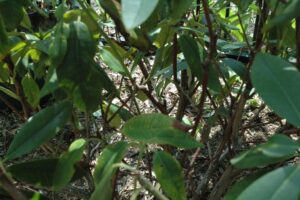 We planted three rhododendrons ‘Lee’s Dark Purple’ three years ago in our west Toronto oak canopied backyard. This year they do not appear to be thriving- the leaves are a bit sparser and there are hardly any buds. We have added compost over the seasons and I make my own mulch from cedars and pine debris at our cottage. We also have an irrigation system. I feel that they are in the right location as there are other rhodos growing beautifully next door. Do you have any suggestions as to what I can do to improve their health?

Thanks for contacting the Toronto Master Gardeners.

You have concerns about a lack of buds and sparse leaves on the three rhododendron ‘Lee’s Dark Purple’ that you planted three years ago. You mention that you not only use of an irrigation system, you are diligent about adding compost and using mulch including pine needles, which is ideal for rhodos.

First of all, is it possible that they are being over-watered? Rhodos prefer a moist, acidic but well-drained soil. As you are probably aware, much of the soil in Toronto is more alkaline (clay-based)–drainage could be a problem.  How often do you use your irrigation system?

Secondly, perhaps your rhodos are planted too deeply; or the added compost and mulch may be ‘burying’ the shallow roots. “Rhododendrons are shallow rooted plants.  Their roots grow just below the soil line.  If they are placed too deep in the ground, the soil that covers the roots serves to smother them….planting too deep will basically stop the plant from growing.  Eventually this leads to the death of the plant.”[ref.]

The fluctuating temperatures and weather conditions in Toronto may be also affecting your rhodos. Sudden freezing temperatures that we experienced a couple weeks ago might have ‘killed’ any buds on the plant. However, you seem to indicate that there were ‘hardly any buds’ on the plants this season. Also, please note that rhodos and other shrubs have been delayed in leafing out and blooming due to the unusual weather conditions that we’ve been experiencing this spring.

You mention that the neighbours’ rhodos are “growing beautifully”; are there any differences in the amount of sun that you and the neighbours’ are getting under the oak canopy?

The main concerns when growing rhododendrons in the Toronto area are: the amount of water they are getting and the depth at which they are planted. It’s important to monitor the amount of water your rhodos are getting; even though we’ve had very little rain this spring, using an irrigation system may have provided too much water to your rhodos. And while using your own mulch and pine debris to maintain moisture and an even temperature in the soil as well as to add nutrients to the soil, you should check to make sure that it isn’t too thick around the roots of your rhodos.

Hopefully these suggestions will help to improve the growth of your rhododendrons so they will look as healthy as your neighbours’.