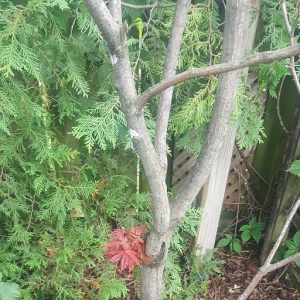 We’ve had a bloodgood japanese maple for over 10 years that reached over 12 feet high that always did well in our south facing backyard. This Spring, it did not leaf out…until this weekend when a few leaves appeared towards the bottom of the trunk (see pic). It’s ironic as we had just gone shopping for a replacement and were reading about Bloodgoods vs Emperor Japanese maples.

Do you think tha there is any chance that the existing Japanese maple will coitnue to ome back? We were pretty sure it was dead. Also, as I understand the Emperor version is supposed to be “improved” – have you found this to be true and if so in what ways? It’s going to be a considerable investment to replace our tree is any way so we’d like to be sure we pick the best option possible.

Thank you for contacting Toronto Master Gardeners with your question.

Unfortunately the picture shows a die back of the crown of your Bloodgood Japanese maple.

This may be due to a stress caused by drought or a lack of water. Japanese maples love moist, organically rich, slightly acidic, well-drained soils.  Another cause could be related to the planting of the tree having resulted in root girdling. Stem girdling roots choke off the flow of water and nutrients between the roots and branches and food produced in the leaves from reaching the roots. Slowly root girdling results in die back of the crown of the tree.

Your best choice is to remove the tree and plant another one. Both Bloodgood and Emperor Japanese maples are very similar. They grow to be about 15 to 20 feet tall at maturity, with a spread of 15 to 20 feet. They have a low canopy with a typical clearance of 4 feet from the ground. These trees do best in full sun to partial shade. They prefer to grow in average to moist conditions, and shouldn’t be allowed to dry out. They are not particular as to soil pH, but grow best in rich soils. They are somewhat tolerant of urban pollution, and will benefit from being planted in a relatively sheltered location. Consider applying thick mulch around the root zone in winter to protect it in exposed locations or colder microclimates (but stay away 10 cm from the trunk).

For more information on caring for your Japanese maple, please visit the following sites: