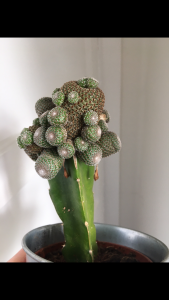 Hi, are you able to tell me what this cactus is please? And why it has so many protrusions at the top (is this normal?) Can I propagate it?
Thanks for your help!
Jo

Some cacti consist two compatible species of cactus that are grafted together to form one plant.  The cactus in your photo is such a plant. So to answer your question, we have to identify both the top part of the cactus (called the scion) and the green base (called the rootstock).

Identifying the scion is challenging, although we have narrowed this down to a few likely contenders. I consulted other master gardeners and cactus experts for the identity of the scion, which looks like a mass of button-like structures (called offsets or pups).  These structures are perfectly normal and should flower at some point!  I initially felt it most resembles Blossfeldia liliputana. Others have suggested Rebutia heliosa, Rebutia minuscula (Mexican Sun Ball) or Mammillaria bocasana (Pincushion Cactus).   An excellent resource that includes photos of these cactus species (and much more!) is Cacti guide.  Just search on the Latin Names function under “Cacti Name Search”.

The bottom part of your cactus (called the rootstock) is likely Hylocereus trigonus, which is commonly used for grafting.

Your cactus would be propagated by grafting.  Scions are generally more ornamental (showy!) than rootstocks, but may be finicky and not survive well on their own.  So, by grafting the two, the scion can take advantage of the hardy rootstock’s vascular (circulatory) system.

If you wish to go ahead and graft cacti, pull, wiggle or cut off at least a 2.5 cm (1 inch) piece from the scion. Remember to protect your fingers – wear gloves or tape  your fingers to avoid getting poked by the plants! Set this cutting on top of a rootstock that has already been planted, which you have cut to the desired height. When cutting, use a clean sharp straight-edged knife (sterilize it with rubbing alcohol before using).

Where the two meet, the scion and rootstock should have approximately the same diameter, and there should be a ring or little dots on the cut surfaces of each.  These are part of the circulatory system of each cactus.  Align the rings/dots on the scion and rootstock as much as possible (this is very important, so that nutrients can circulate between the plants!) and press the plants together.  Tie with string or circle rubber bands around the plant to secure the two parts – over top of the scion and around the bottom of the pot. After 2 weeks or so, the tissues of the two cacti should have grown together, and you can remove the rubber bands after 1-2 months – by then, the scion and rootstock should be firmly attached.  Don’t water the plant until the cut areas have healed.

Alternatively, if you just want to propagate the offset (from the scion), twist/pull it from the parent plant or cut it off cleanly with a knife.  Make sure to cut off any part of the parent plant that comes off with the pup – as this will rot and harm the pup.  Leave the pup in a cool, shady spot until the raw tissue heals and a callous forms – this may take a few days and the end should look hard, dry and a bit shriveled.  Next, pot it up – the pot should be just a bit wider than the diameter of the offset, and use soil that contains 50% perlite and 50% peat or compost (or buy a cactus mixture).  Put the pot in bright, indirect light and keep the soil slightly moist.  It may take several weeks to a few months for the little cacti to root – you’ll be able to tell when you see new green growth.  It is important to note that some cacti do not do well when propagated via cutting the offset – this includes miniature Rebutia cacti – which yours might be.  On the other hand, most Mammillaria can be propagated this way. It may be worthwhile to try this technique, and see if it yields results!

The world of cacti is a fascinating one, and we would appreciate hearing back from you about whether you go on and propagate your plant!  Or you may prefer to coddle your cactus and wait for the scion to bloom.