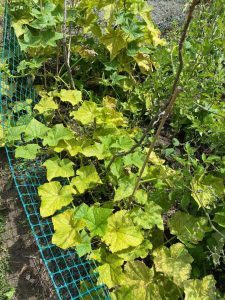 Why dis my cucumber leafs turn yellow?
Thanks.

Thank you for writing — it’s not evident from your photo if your plants have come in to bloom yet, but, at some point, as your cucumbers develop their produce, the leaves will eventually turn yellow and die.

The most common reason for prematurely yellowing leaves is a watering problem — too much, or too little, water. The leaves don’t appear to be brown, or crumbling, so drought does not seem to be the issue. Central Ontario has recently received an exceptional amount of rainfall, and so the latter could be posing a problem. Good that you have taken some care to elevate the plants on netting, to provide aeration, and alleviate potential damage from wet growing conditions, and ground pests.

Also, there could be a nutrient deficiency. Your photo shows you seem to have companion-planted tomatoes, so there may be some hearty competition for food. During the flowering stage, the potassium need for cucumbers tends to be higher.

Cucumbers also eat up a lot of sunlight, a full day’s worth, or the leaves will start turning yellow. On the other hand,  additional extreme heat this season has also threated the ability of pollen to fertilize the cucumber flowers.

So there are numerous factors at play. Fortunately, your plants do not appear to be diseased, or damaged, and hopefully this will help you to be aware of some of the potential growth factors at hand during the growing season.