I planted a few Dahlia on my balcony box this spring. So far so good. Then late last week as the temperature here in Toronto finally rises and becomes much sunny and higher,the leaves on the plant on the far left becomes droopy. Then the leaves of the plant in the middle also becomes droopy. I thought the plants were getting enough water so I watered it a bit more. The middle plant recovered but as you can see in this picture, all the leaves are drooping and even the stems are lumpy and not very firm. I checked the plant for insects and did not find any including signs of holes in the leaves. I planted a wooden spike and tied the plant around it to give it more support. I dogged my finger to the bottom of the balcony box and it wasn’t wet, just moist. So I am not sure if the plant is overwatered, underwatered or suffer from a disease or insects. 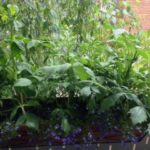 Thank you for contacting the Toronto Master Gardeners with your inquiry.

It is difficult to tell from your photo what is exactly happening to your dahlias, however from your photo it appears as if you planter boxes are quite full. With the sudden increase in warm temperature after a period of cool temperatures the plants need for water increases. The fact that the middle plant recovered after additional water was applied confirms this fact.

As the plants grow in your container the requirements for water and nutrients will also increase. make sure to water your containers thoroughly.

Within a week or so if the plants begin to pick up with consistent watering you may want to consider fertilizing.Dahlias benefit from a low-nitrogen liquid fertilizer (similar to what you would use for vegetables) such as a 5-10-10 or 10-20-20. Fertilize every 3 to 4 weeks from mid-summer until early Autumn. Do NOT over fertilize, more is not better.

If watering does not improve your plants look for signs of disease. Dahlias can suffer from a viral disease called verticillium wilt which is a fungal disease that lives in the soil. The fungus invades susceptible plants through their roots and spreads through the plant’s vascular system causing leaves and flowers to wilt and curl. The leaves  eventually turn brown and drop off. Stems and branches die back. It’s not unusual to see these symptoms on one side of the plant while the other side appears unaffected.

There is no control for Verticillium wilt once it enters the plant. If you suspect that you have this disease it is best to remove and destroy susceptible plants. The disease remains in the soil after you remove the plant, so don’t plant another susceptible species in the same area.