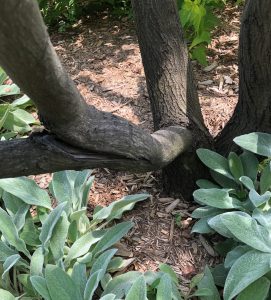 Hello – Thank you for reading my question. I was hoping for your advice regarding this Downy serviceberry branch that I realize we should have wrapped when it was first damaged during some construction. It’s now a black gash and while the leaves up top are mostly fine minus some powdery mildew, I’m wondering if we should cut the branch off the tree before the rot works its way into the trunk (if it hasn’t already). I feel very badly about this. It’s a very graceful, 15-ft, vase-shaped specimen and this branch basically makes up the left side of the tree.

It seems that your Serviceberry may be growing more as a very large shrub, with four lateral sections, as structurally different from a tree with one main trunk.

First: how long ago was the plant damaged, and what caused it?  It almost  looks as if a clean slice was made into the elbow of the first and second leaders — as opposed to a jagged rip. Your image does not reveal the volume, or weight, of plant matter the damaged branch is supporting, but the branch seems to be holding its own.

Second: we do not see any evidence of rot, or mold, from your photo, so perhaps the plant responded to the wound quite a while ago. Trees deploy a process of isolating damaged cell tissues (both interior and exterior) from new, healthy tissues. This act of creating a barrier is a tree’s means of making the area unsuitable for potential decay organisms. Tree wounds should not be wrapped, or painted with any product: this can actually interfere with the plant’s natural wound closure. The “black gash” you describe could be a darkened concentration of new tree cells surrounding, and protecting, the area that was split.

Third: As for cutting off the left lower section: consider how much time has elapsed from the original damage, and the fact the damaged section is apparently healthy, as it’s in leaf. Making another cut into the tissue now could cause more stress on your Serviceberry. Also, regarding the powdery mildew: this is a fungal disease which leaves a white-ish covering on infected leaves. For control, provide good soil drainage, and promote better air circulation around the branches:  prune out dead or competing  plant matter on the weaker section, and equalize throughout the whole plant.

You may consider staying the course. Treat your Serviceberry to nutritious organic compost, and plenty of water during the summer and fall. You have wood chips surrounding it right now, but ensure that any further mulch is not placed near the trunk base. For the time being, remain watchful, particularly during periods of high winds, heavy rain, or  snowfall as that branch will be prone to further breakage.