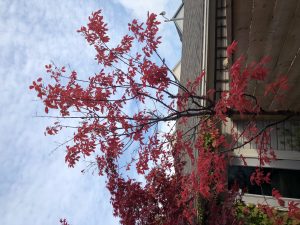 Hi there — we’ve had our paperbark maple for over two years now. I love the leaves and textured bark (when raccoons & squirrels aren’t removing it). But the leader has been bare this whole time as have a few other, smaller branches. Do I leave them regardless of whether there is green under the bark, or trim them? I’ve read you should never top a tree.

Hello – Thanks for including the photo. Your paperbark maple (Acer griseum) is a lovely specimen. Paperbark maples should not require much if any pruning but I would prune out any major dead branches (including the leader) rather than risk them breaking off in a high wind and causing other damage to the tree. While you’re right that ‘topping’ a tree is generally not a good idea, the broad crowned nature of maples makes this less of an issue for maples. Note that maples should be pruned when actively growing in mid-summer. When pruned in early spring, maples may lose large amounts of sap. If pruned too late in the fall, the wounds will not have a chance to heal before winter.