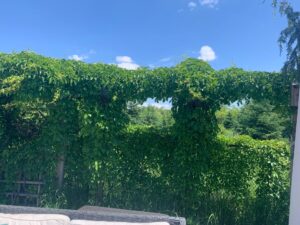 Hello,
I am looking to grow and train a vine for a privacy screen between yards along the top of existing fences. I currently have 30ft of engelmens ivy that is trained along my back fence (photo attached). It is trained along a copper pipe that runs between pergola posts 8ft off the ground. I love the floating effect but don’t love the Japanese beetles that arrive each year. I’m looking for a similar effect without the bugs. Could you recommend a similar vine that would like the full sun that Japanese beetles won’t eat?

Thank you for contacting Toronto Master Gardeners about a vine that Japanese beetles won’t eat.

Japanese beetles feed on the leaves, flowers or fruit of more than 300 species of plants.

There are some plants that are less favoured by these beetles. Clematis is one of these plants. In term of vines, there is a fast-growing native clematis, Clematis virginiana that you could consider for your floating privacy screen.

Be forewarned that these beetles could still decide to eat your clematis.

Japanese beetles are attracted to grape vines and Virginia creeper, so avoid these vines.

Unfortunately, invasive species such as Japanese beetles are a fact of life for gardeners.