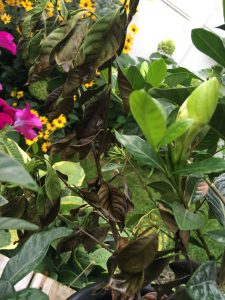 Hi,
We have a gardenia that was very healthy and blooming. It’s a cluster of some 4-5 stems, in a well draining soil (about a 12″ pot with lots of holes). It would have the occassional yellow leaf, but otherwise in good shape.

Last week, we noticed one stem where the leaves at the top started to curl and wilt, and the leaves from the bottom turned black making their way up the stem. I tried scraping it off (to see if it’s sooty mold) but the leaf itself appears more like it rotted. I tried to look for bugs, but couldn’t see anything, not even dots. There are some spiders (not mites) about the garden that weave between the pots, but none of the other plants, including another gardenia we have (same soil, same pot, same location) are affected.

We pulled out that branch, to protect the others and inspected the roots – they looked and smelled fine. Now, two other stems are doing the same, while the others continue to look healthy and bloom (you can see a dying stem and a healthy one in the pic). We are worried about the rest of the plant. Any ideas on how to save i?

From your description of the plant’s leaves, this sounds like a fungal infection.  Although it’s hard to see details in the photo you sent, entire leaves almost look like they have dried up.  It’s concerning that the stems are also affected.  Take a look at an earlier post on Ask a Master Gardener, Gardenia – black spots.  This relates to leaf spot disease, where leaves actually would look spotted; I don’t believe that this is what’s bothering your gardenia, but it’s worth a look at the response.

You’ve verified that it’s not sooty mold that is afflicting your plant, but black spots often mean some sort of fungal infection.   This could be rhizoctonia, a fungus that causes brown spots on leaves.  It may be hard to tell whether the discoloured areas are black or brown.  The fungus persists in soil and is passed on by infected soil.  Rhizoctonia starts on older leaves and moves upwards, when the gardenias are watered excessively or are overcrowded and lacking in air circulation.  To treat, remove affected leaves, prune the plant to ensure good air circulation and transplant the gardenia into a sterilized container, with fresh (sterile) potting soil.

Root rot also comes to mind, as this can be caused by fungi as well.  However, you’ve examined the roots, which you say look and smell fine.  With root rot, you would usually see yellowing of the leaves (oldest ones first), followed by leaf drop and wilting.  It may be worthwhile re-examining the roots – those affected by root rot would not have healthy white roots, but rather brown and rotting ones. Root rot is promoted by wet soil conditions and can cause gradual decline or sudden death in gardenias and may affect all or only part of the plant.

Sometimes too much love and attention can be a bad thing.  Overfertilizing a gardenia can result in brown patches on leaves and browning leaf tips/edges, among other things. You’ve likely been watering the plant regularly, and as the pot drains well, would not expect that the plant is resting in soggy soil.  But overwatering can create an ideal environment for fungus to thrive.

And leaves can curl due to excess heat, but that’s usually in the presence of low humidity.  It’s the end of August and we’ve had a very hot, humid month but not much rain.

All the best in saving your lovely plant!