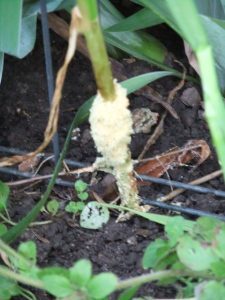 I, and my neighbours are having trouble with our garlic this year. We are located is south east Toronto, Leslieville.

The picture 1 attached is of a garlic that was planted using a clove from last year’s harvest and has a growth on it. You can see from the attached picture that the base of the steam is encased in something that resembles parmesan cheese!? It is the only garlic I’ve found in the garden with this on it.

This particular garlic originates from Meteghan, Nova Scotia, and I have no idea what it’s called. Picture 2 is of the bulbs. The bulbs are usually very small, when planted from seeds. If you’re really lucky, and you’ve planted from a large clove, you may get a larger bulb, but still not large. Although not large bulbs, it is really easy to grow and stores well over the winter.

Can you please tell me what this is?

Is it an airborne situation, or something in the soil?

Can I plant garlic in this location again, or is now permanently contaminated?

My other questions are about other types of garlic. This year I, and some of my neighbours, have planted different types of garlic: Music, Port au George, Rose du Lautrec, a Portuguese and a Poland. In the spring they were all going gangbusters. Some of my neighbour’s turned to mush and he lost most of them in June. Mine outlasted his; until now. The stock is still there, but when you go to dig out the garlic, the stock has rotted just below the surface. On a couple of them, digging uncovered some not great looking cloves. Others there was nothing!? Of the 13 Music planted, 5 disappeared, of the 7 Port au George, 6 disappeared.

What would cause the stocks to turn to mush in June?

What would cause the stems to rot below ground?

What would destroy the entire bulb?

Any and all advice would be greatly appreciated. This is my first year trying to grow something other than the Nova Scotia garlic, and I can’t say the results are all that encouraging.

Thank you for your time and consideration.

Thank you for your detail-filled question and photo.  It is always easier to make suggestions with as much information as can be provided.

Looking at the white substance at the base of your garlic stem, there could be one of two issues occurring to your garlic.  According to Cornell University’s College of Agriculture and Life Sciences, it could be basal rot or white rot.

Basal Rot: The symptoms of basal rot are slow to develop. Often, they are seen as a yellowing and eventual die back of the leaves. Sometimes one can also see white fungal growth at the bulb base, which will lead to both pre and post-harvest rotting. Post harvest rotting can include single, several or all of the cloves in the garlic bulb.

White Rot: The symptoms of white rot may look almost identical to basal rot, with the exception that the process of disease initiation to plant death is more rapid. Early symptoms include white, fluffy fungal growth on the stem that extends around the bulb base. Small, dark, over-wintering structures called sclerotia form in the decayed tissue, symptoms however, include an erratic plant stand developing in the field, stunting of plants, yellowing, deformed bulbs, and stem swelling.

The fungus that causes basal rot thrives in high temperatures which we certainly have been experiencing.  Not all infected bulbs show disease symptoms. The pathogen is often spread by infected seed or through movement of soil and other debris.

On the other hand, the fungus that causes white rot prefers temperatures, below 75°F. It tends to attack plants in the spring which you mentioned was the period that your neighbour’s garlic was affected. The sclerotia can survive in soil for indefinite periods of time in the absence of garlic or other hosts. Sclerotia are stimulated to germinate in the presence of organic sulfur compounds produced by the plants. Once the plants become infected, disease and rot rapidly ensue, either killing the plant outright or causing rot of bulbs later in storage.

What to do now?  Clean your tools to avoid further contamination.  I suspect that this rot may have been introduced by the new seeds you and your neighbours were trying out and I would suggest not using these again.  Remove infected plants as soon as they are detected. Finally, once the pathogen has been established in an area, you should not plant garlic in this area again for a few years.

A great reference for general information and tips on successfully growing garlic can be found in one of our Gardening Guides here: