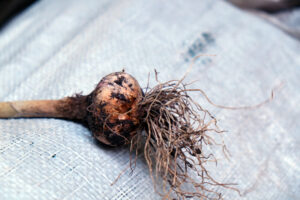 I am hoping to sort out whether or not my crop has been infected with the aforementioned nematode. My plot is in the west end of Toronto(zone 6a), in a community garden. I have been growing garlic there for the past seven years with good success. There were 7-8 different varieties grown, with one being a softneck and the rest ophios. It was grown in full sun, in ground and I have amended the soil each year, either with well-rotted manure or green manure crops. The soil structure is fairly loamy in parts, but still retains some heavier clay sections. Two years ago would have been the first time spotting a problem with one or two of the bulbs upon harvest. At that time, it appeared to be something similar to onion root maggot damage, but was limited in scope. This season, I noted significant yellowing of the leaves and leaf sheaths as early as the beginning of June. I pulled one to inspect it and found nothing out of the ordinary. I harvested the rest on 17 July and the damage was both evident and scattered throughout the bed. The bulbs that were affected did not all show the same symptoms. Some had orange discolouration along with rot visible, others had green mold covering the bulb, while other bulbs had rotted away completely from the basal plate. Roughly 10% of the garlic crop was visibly affected. None of the softneck appeared to be affected. Having read up on the stem and bulb nematode, my concern is whether I should be avoiding planting any members of the Allium family in that bed for the next four years or so. The plot is 9’x10′ overall, divided into two separate beds, with a path of approximately 1′ dividing them and I have been rotating the garlic crop between the two. If it is indeed the nematode that has affected the plants, should I be avoiding growing Alliums anywhere in the plot for the four year duration? Should I as well, inform all of the other gardeners to avoid growing within this family? As far as I am aware, no one else has experienced this kind of damage with their garlic. I have spoken with a lab that conducts soil tests, however they recommended I approach the master gardener site before proceeding with them. Any help or advice would be much appreciated.

Thank you for your time and consideration.

The short answer is:

It is not possible for us to diagnose what is attacking your garlic crop.  See Growing garlic from cloves: a Toronto Master Gardeners Guide  for general information on caring for garlic, as well as links to disease and pest control resources.

With nematode infestations, you would see stunted growth, yellowing/collapse of leaves and premature defoliation. Bulbs would be discoloured, then would shrink and darken, and perhaps cracks would be visible around the basal plate.  Roots may be totally absent or absent on one side of the basal plate.  Later symptoms include swellings (bloat) and deformed bulbs – afflicted bulbs are also vulnerable to fungal and bacterial diseases and mites.  Note too that nematodes can continue to reproduce and cause damage to garlic cloves that are being stored.

Here are a few good resources:

If what’s attacking your garlic does turn out to be stem & bulb (bloat) nematode, experts recommend a minimum of 4 years between planting of allium species or other crops that are vulnerable to the nematodes, and to do so only after soil has been tested several times and found to be nematode-free. Even low numbers of the nematode present in soil can ultimately cause significant damage.  It may be challenging to eliminate the nematodes, which can be spread by water, via contaminated seed bulbs and equipment, as well as by animals.  You could try carrots, potatoes, corn, grains. (If you choose potatoes, plant only certified disease-free potato seed, as a fungal blight is a concern – see Ontario CropIPM. Late blight )

Here are some cultural practices recommended to help combat nematodes in the future:

All the best in determining if nematodes are indeed the villains, and in ultimately growing healthy garlic in your community garden!