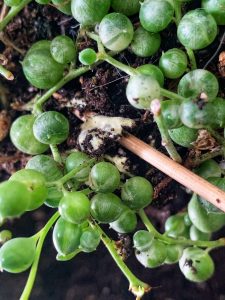 What’s this gooey substance that has appeared on the surface of the soil? I noticed it after re-potting, fortunately, my strings of pearls appear unaffected. Also, I’ve noticed gnats. Any suggestions on how to get rid of them?

Thank you for contacting the Toronto Master Gardeners.
The white substance that you are seeing in your soil is most likely a harmless mold. Soil rich in organic material usually contains this mold. This mold will not harm your plant, however it is an indication that the environment around your plants is most likely susceptible to disease, such as root rot. Overwatering the plant and poor drainage encourages the growth of this saprophytic fungus, which feeds on the decaying organic matter in the soggy soil.

Begin by scraping the mold from the surface of the soil and place the pot in a well-ventilated area so that the soil can dry out.If the mold returns or the soil remains soggy, you should repot the plant using fresh, sterile potting soil. Before you use the pot again, soak it in a solution of 1 part household bleach and 9 parts water for 10 minutes and then scrub it with dish detergent and water.

Another indication that your soil is too wet is the presence of fungus gnats. Fungus gnats are small, slender, dark insects that fly around when plants are disturbed. While the adult flies are annoying it is the larvae, which may cause problems. The gnats lay eggs on the soil surface, and the larvae feed on decaying plant material in the soil. Larvae, particularly if in large numbers may cause root damage or stunted growth. The key is to reduce the moisture levels in your plant soil and remove any plant debris on the surface. Let your potting mix dry more between watering, as larvae cannot survive in dry soil. If this doesn’t work try the following: