My parents recently bought a hanging flowering plant from Costco wholesale, but over the two days that they were gone, it wilted completely. Is it because they didn’t water it? We just thought it was strange because it was only two days and it looked healthy before they left Perhaps it was the drop in temperatures?
We’re not sure about the name of the plant, but I’ve attached a picture. We live in North York, Toronto, and the plant was potted outside in a sunny area with potting soil. 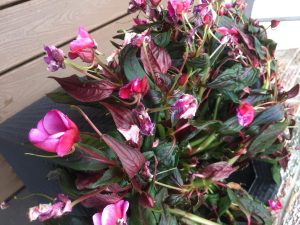 It was a bit difficult to identify your plant, as the flowers are quite damaged, but it appears that your parents have bought New Guinea impatiens (Impatiens x hawkerii), which are very popular as hanging plants because of their showy flowers, long bloom period and tolerance of some shade.

As a tropical plant, New Guinea impatiens do not like the cold. The most likely cause of the wilting is because cold conditions we’ve experience in the Toronto area the past couple of weeks.  Early May is likely a bit ambitious to keep New Guinea impatiens fully outdoors, as they will suffer when temperatures drop below 10 degrees Celsius.  However, they may be hope for your plant yet.  Protect it by bringing it indoors during days and evenings that might drop below 10 degrees.  You can put it back outside on warmer days but keep out of full sun.  New Guinea impatiens will tolerate some sun, but prefers partial shade or about 4 to 6 hours of shade each day.

Remove any of the severely damaged flowers but leave flower buds that still might be viable.  New Guinea impatiens also like to be kept moist, but not saturated, should not be allowed to dry out completely.  Any stems and leaves that don’t recover within a few days can be pruned out.  An application of balanced fertilizer every 10 days to two weeks following manufacture’s instructions may also help with new growth.  Once the weather warms, you may find the plant returns to a more vigorous state.