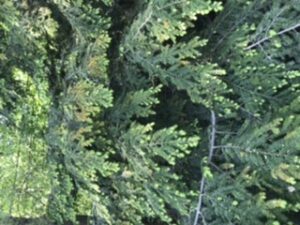 Toronto, Hemlock tree approx 25’tall spreads 15 d’y at widest. Was very happy until recently I noticed browning in scattered places on mostly east and north east and and a bit west side of tree. The back (south isn’t browning. There is lots of new growth. The other two trees which are set a bit back (south) are unaffected. I can’t find any pests, it’s watered regularly, I see no standing water. 3 years ago I installed some shrubs and an irrigation system but the browning only just started this year. I wonder if there is a bore hole or this is just a scar from a beach that may have snapped off. I wonder if it’s due to extreme heat/sun exposure before the maples surrounding it had leaves but why is my most eastern hemlock spared? Thanks

Thank-you for contacting Toronto Master Gardeners with your question about browning leaves on your Eastern Hemlock (Tsuga canadensis) tree. Browning is often caused by an insect problem, but if you have not found any evidence of insects on close inspection, your tree must be undergoing an environmental stress.

Drought can be a serious problem for hemlocks. They require an evenly moist soil, but equally, waterlogging can be fatal. It does not sound like your tree is experiencing either condition. (It is important to water less frequently, but deeply.) Wind can be a problem; especially harsh winter winds. If your tree is in an exposed position, this could be your problem. The roots of hemlocks are shallow. Again, some kind of interference with the root system could be the culprit. Without examining its situation it is difficult to diagnose the problem.

In many cases, the tree will be able to recover and regrow new foliage. If the branches are still alive (green if you scrape away a bit of bark), they will probably be fine. If the branches die back completely, make sure to prune away any damaged parts to reduce the chance of an insect or disease issue.

The following article gives some general information on hemlocks, including some of their environmentally-caused problems:

I hope your tree recovers!