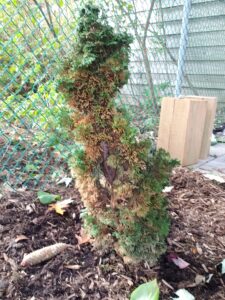 Hello, I planted a hinoki false cypress this Spring and it looks about dead. Brown all over. Can you tell if it’s due to not enough water or rot? I planted with triple mix and watered (maybe more frequently versus deeply) and did use a 5-15-5 fertilizer when first planted. I did see some white fungus on the surface with the mulch which I read was potentially a normal part of the decomposition process…it also seemed like the roots were close to the surface as I saw some when moving the mulch to the side. Assuming this plant cannot be salvaged in it’s current state? Any idea on the diagnosis for its fate?

Although it is normal for conifers to shed brown needles from the inner parts of the plant at this time of  year, yours does look as though it’s in trouble.

This plant is susceptible to root rot, so it is possible that, as you suggest, too much watering was the culprit. Also there seems to be a lot of mulch (which you describe as decaying) up against the tree, which would have contributed to the problem. And is that a downspout nearby? Would it be emptying into the spot where that tree is?

Clear away the mulch and gently dig down to check the condition of the roots and lower part of the tree. Brittle rust or brown-coloured roots, or discolored feeder roots indicate root rot. There may also be fungus over the soil line. (which it seems you have noticed) and rust or brown-coloured bark close to the bottom of the trunk.

It also looks like the tree is close to a building. Does it get enough sun? These are best grown in full sun or at most, partial shade.

Further, these trees are susceptible to juniper scale (Carulaspis juniperi) and bagworms, but since you have been inspecting the tree, you would have seen some evidence by now. (Bagworms web dead foliage and other debris together to make nests and you can find a good picture of the scale here.) Juniper tip blight occurs as the name suggests … at the tips of the branches, which is not the case here.

Again, you are probably on the right track by thinking root rot, for which, alas, there is no cure.