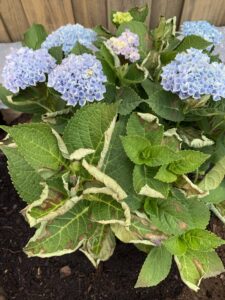 I just put this hydrangea in the brand new soil flower bed about a month ago, I am not sure what is wrong and how to take care of. It gets afternoon sun.

Based on this photo, you have a Hydrangea macrophylla, which is a less hardy hydrangea for growing in Toronto. It’s a popular plant in garden centres in early spring and is commonly force-bloomed in greenhouses to flower when it’s in nurseries for sale in spring. (In Toronto hydrangeas generally don’t start to bloom until early summer). If these plants are planted outdoors in early spring, they may get frost damage on the leaves, causing them to turn black or brown, but I don’t think that is the case here.

There are a couple of likely reasons for the browning around the edges of your hydrangea.

The hydrangea may be receiving too much sun (or more sun than it’s been used to as it has grown so far). Since you mention that it received afternoon sun, I don’t think it’s getting too much sun. The leaves may have been sun scalded if the plant wasn’t hardened off by gradually increasing its sun exposure before being planted outdoors. If this is the case, any new leaves won’t have this issue.

The leaves could also be browning and curling due to insufficient water, especially since it looks like it’s the edges that are primarily affected. Hydrangea macrophylla requires plenty of water and well-draining soil. Water when the first 3-6 cms of the soil are dry. You may need to water more than once a day in Toronto heat but let the feel of the soil tell you when it’s time to water.

You may also want to look up leaf spot on hydrangeas to assess whether the issue may be fungal (in which case you’ll want to limit watering directly on the leaves to avoid spreading the spores). You can read more on hydrangea diseases here.

I will also point you to Growing Hydrangeas: A Toronto Master Gardeners Guide for more information on caring for hydrangeas.