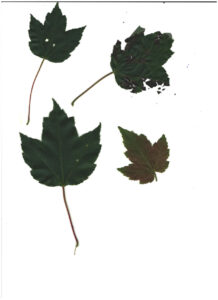 My maple tree is two years old. I do not want to lose it. Attached is a picture showing several leaves. As you can see the new ones look perfectly healthy.

What can/should I do to salvage the tree. See Photo attached.

I believe your tree has Tar Spot. This is a fungal disease and has mainly a cosmetic effect on the tree. The spots appear later in the season, which is why this year’s leaves look good so far.

Toronto Master Gardeners have answered questions about this disease previously and here is one of their answers:

“The black spots on the leaves of your maple indicates it has a fungal disease (Rhystisma acerinum), also known as tar spot, which originally came from Europe. Tar spot is one of the most readily visible and easiest maple diseases to diagnose.  It’s been prevalent in southern Ontario for several years.  In fact it appears most trees across the northeastern part of the continent have become infected after exposure year after year. Thankfully, tar spot is rarely serious enough to threaten the health of trees, but makes trees unsightly. Heavy infections can also cause early leaf drop.

Since tar spot fungi overwinter in fallen leaves, the most effective management technique is to rake and destroy leaves in the fall. This will reduce the number of overwintering “spores” (containing the fungal reproductive structures) that can infect new leaves the following spring. Neighbors should also rake and destroy infected leaves to be really effective.  Rake and bag up the leaves in your garden for collection by the City.  Leaves collected by the City are subjected to higher temperatures  in the composting process, than homeowners can ever manage, which should destroy the spores.  Realistically it is very difficult to eradicate tar spot, so do not be surprised if you still see it around for some time. The good news is that there is no evidence that compost produced from infected maple leaves will trouble other garden plants in any way”