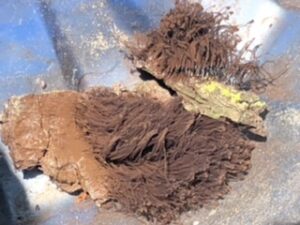 We found this hairy mold on the bark of our pear tree. It was only in one spot. Can you tell me please what is that? Is it dangerous for the pear tree? Do we need to spray the tree?

It is not clear from the photo if the patch is fresh and soft or a dried brown. I am assuming that because you referred to it as a mold, it has a soft texture. If that is the case it could be a slime mold called Stemonitis splendens (Chocolate slime mold) which is found in Ontario. Slime molds live on dead or decaying material and frequently appear after a period of wet such as during spring rains.  It first forms a low patch and eventually produces the long brown tendrils that carry its spores. They do not harm the tree and can be easily removed by using a hose to direct a forceful spray of water at them. Here is an interesting video on youtube about slime molds. Even more interesting are a couple of longer documentaries about slime – The Creeping Garden (2014) and an episode on PBS NOVA  called Secret Mind of Slime.

My first thought when I viewed the photo was that it was a dry brown material like a dried moss of some type. One would need to look more closely at the structure of the individual pieces for a positive identification. If it is a moss, it also should not harm the tree and you can just scrape it off carefully making sure you do not damage the tree bark.

Mosses are an ancient plant that can be found world wide from the tropics to the Arctic. There are almost as many species of moss as there are flowering plants. In fact there are 522 known species in Ontario alone. Mosses do not flower, reproducing instead by spores. They also have no roots but use structures called rhizoids to anchor them to a substrate like tree bark, soil, rocks or even concrete. Although some rhizoids can take up nutrients from its substrate, the majority take up nutrients and moisture from rain or surrounding water. The moss acts like a sponge retaining moisture so are a benefit to the environment, reducing water run off, modifying the surrounding temperature and providing shelter for small organisms.

Mosses tend to have a better public image than slime molds and are often valued for their visual appeal hence displayed in “moss gardens” but as mentioned in the 2 documentaries slimes are also fascinating organisms. Either way your pear tree should not be harmed by their presence.

Although the mold or moss may not harm your tree, one should consider the conditions that led to the growth of the organism. Both thrive in a moist atmosphere and molds grow on dead wood. Is your tree healthy? Is it in a location that is too wet? Is there good air circulation around the tree? Here is a link to a site with good information about growing fruit trees.