A new vine has appeared in our garden and we would like to know wether or not it is desireable and what it’s name is. It has only been here four a few weeks and is growing like a week.
Thank you for your help 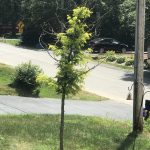 It is often difficult to positively identify plants from  photograph. It appears tht your new plant could be wild grape. There are 60-70 native species of wild grape that grow in the northern hemisphere.  Of those, Vitis riparia, V. aestivalis and V. labrusca grow in southern Ontario (Soper and Heimburger, Shrubs of Ontario, 1982).  The differences between them mostly are described by characteristics of the leaves. All flower and bear small, purple fruit that are edible to people and wildlife.

The vine in  your photo appears to have leaves which are more heart-shaped, and these are characteristic of Vitus riparia, commonly known as Riverbank or Frost Grape.  Wild grape may be found in woods, on riverbanks, along fences and roadsides and other areas (indeed, it is often found where it is not wanted in orchards, garden edges, and other cultivated areas).

The Toronto Master Gardeners responded to another writer’s question about wild grapes, the following  link discusses other plants that may be confused with wild grape, including the Canada moonseed, Menispermum canadense, whose fruit is toxic: https://www.torontomastergardeners.ca/askagardener/identifying-wild-grapes/