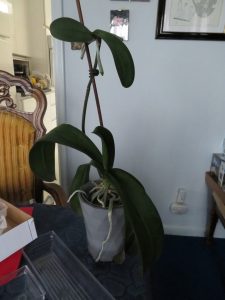 I have an orchid which has grown a “baby” on top – what should I do – separate it – leave it alone? Will it ever bloom?

Congratulations are in order — your Phalaenopsis orchid had grown a “keiki” (pronounced KAY-kee), or baby, this moniker adopted from the indigenous Hawaiian word for ‘child’. This fledgling is an exact clone of its mother plant, a result of the plant producing extra growth hormone. Yes, you can make plans to eventually separate this keiki from its mother, and nurture to a mature orchid.

“Sometimes small plantlets (keiki) appear from the nodes on the flower stems. Detach the plantlets when they have developed several good roots, and pot them up in orchid compost. Water them sparingly at first, but mist them daily.”

Further, the RHS goes on to describe how you can actually promote the growth of keikis:

“Production of offsets can be encouraged by application of keiki paste (a hormone preparation available from specialist suppliers), to the nodes of the spent flower spike. Ordinary hormone rooting compound will not do.”  (Keiki paste can obtained from specialist orchid suppliers.)

If you would like to view a short workshop on the planting method and medium,  you might enjoy what the American Orchid Society has to share on the subject. You’ll see that not only Phalaenopsis, but also Vanda, Dendrobium and Catasetum orchids can be propagated, and grown via keikis.

Again, congrats, and hope you enjoy your propagation adventures.