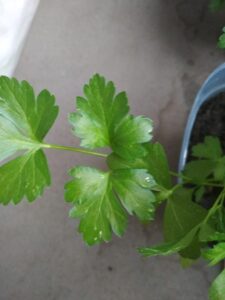 Hi,
not sure why there are white spots on my parsley? it’s planted in a pot ( balcony), gets 4-6 hours of sun. I don’t see any bugs crawling…

The most likely source of white spots on your potted parsley is powdery mildew, a fungal disease that attacks a wide range of plants

New powdery mildew infections are produced by spores that blow onto uninfected plants. The spores germinate on the plant and produce superficial patches (colonies) of greyish-white cottony mycelium and conidia on the upper leaf surface. Yellow chlorotic spots appear on the underside of the leaf opposite the developing colonies of mycelium. Under favorable conditions, colony size and numbers may increase until the whole leaf and sheath is covered. Eventually the mycelium patches turn a grey-brown color and start producing small, black, fruiting bodies (cleistothecia). While powdery mildew is usually found on the leaves, it can also attack the stems and immature heads of the plant. Plants that have been severely infected at an early stage are often stunted and may fail to heal.