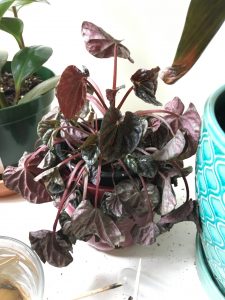 My previously very healthy and thriving emerald ripple peperomia is suddenly and swiftly wilting. I can find no pest problem with it, and it was recently sprayed with a insecticidal soap as precaution, and it’s in the same spot it was previously (so other than progressively getting less sun as the season changed, its conditions have not changed). I thought it may have been root rot, as it sat in water without me knowing in its pot for a couple days, but I let the soil dry and then also checked the roots and soil, and they seemed fine (there weren’t many, I was surprised by how few there were, but they were white and healthy and the soil, organic for tropical plants, was freshly changed in early Sept). The wilt seemed to start a several days after, so I’m not sure if it’s related, but in the last week I’ve watched the wilt spread from about half the outter leaves to almost the entire plant, including those at the core. Can it be saved?

From your description and photograph, we suspect your peperomia is suffering from fungal root rot that has set in as a result of accidental overwatering. Peperomia plants are sensitive to overwatering, and they also like to be slightly pot-bound with not too much soil around their roots. Take the plant out of the pot and examine the roots for mushy brown spots. If the rot has spread to almost the entire root ball, then the plant is unlikely to survive. If there are still some healthy roots, you can try to salvage it by trimming off all diseased tissues, rinsing the roots under running water, and repotting it in new soil that has good drainage. Don’t forget to disinfect the tools and old pot(s) to prevent the fungus from spreading to your other house plants.

We wish you the best of luck with your emerald ripple peperomia.