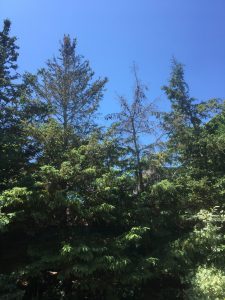 I have been told that the top dieback from my white spruce is caused by Pitch Mass Borer – And that there is no treatment – Just to cut off affected tree – Which I don’t want to do as it is still giving me privacy coverage from back neighbors yard.

Will this infect other tree’s if this is in fact from Pitch Mass Borer?

This dieback happened right after having a one time treatment spray for Needlecast – Just seemed very coincidental that all the new growth with all fresh new pinecones died after this application.

A second opinion(from the same company) said now that I never had needlecast to begin with – and they have reimbursed me the $400 – Which was the 1st application of 3 that was recommended when I had them check for health and have the deep root fertilization done again this year.

Any information you can give me would be greatly appreciated.

If the dieback symptoms are caused by the pitch mass borer (Synanthedon pini – the larva of the pitch pine moth), the destruction sites would normally be on the trunk or on larger limbs, and would be visible. Treatment instructions indicate severe cuts to remove the infested areas of the tree. Look at large branches and limbs for a canker type of injury, or evidence of pitch or sap, which draws the borer to the tree and leads to visible damage.  As to whether this borer can affect other trees, this is possible. The pitch mass borer attacks Austrian, eastern white, Scots and Jack pines as well as white, Norway and Colorado blue spruce.

Another possibility is the white pine weevil, which despite its name, is an insect pest that also attacks white spruce, killing the terminal leader and top branches, while leaving lower branches unaffected.  The advice given here is to prune out the affected branches (as your arborist has suggested) and destroy the infected material.  Sawdust may be visible at the base of your trees. Here is some information on this insect pest that may be helpful:  https://www.canr.msu.edu/news/leader_damage_from_birds_and_weevils_showing_up_on_spruce_and_other_conifer

Although you have already had a couple of opinions from one arborist, we would recommend a second opinion, preferably from an arborist specializing in evergreens.  The arborist should be able to point out areas on the trunk of your tree where the pitch mass borer has been at work, if this is the insect culprit, and should be able to properly prune the top of your spruce if the white pine weevil is responsible.