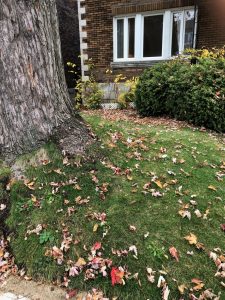 We recently moved to Montréal from Toronto and bought a house. We would like to add some green (and maybe a pop of colour) that will last year-round to the front and back, including through the winter. Here are some details about the property:
– Our house is in the Cote-des-neiges neighborhood, which is just about in the center of the island about half way up the mountain.
– The elevation of our his approximately 100 meters above sea level.
– The front of our house faces East-South, has a large maple tree, grass, and some shrubs (see attached photo).
– The back of our house faces West-North and has mostly gravel and some grass and mint growing along the edges.
– According to natural resources Canada, I think we are in Zone 5 or 6, but i’m really not sure.

According to Natural Resources Canada’s Plant Hardiness Zone by Municipality, the municipality of Montreal is in zone 6a.

Hardiness zone, of course, is a very general guideline. The actual climate of your property will vary, as modified by elevation, exposure… even the urban heat-island effect.

The only evergreen, red-berry bearing holly potentially winter hardy in Montreal is the Meserve hybrid holly (Ilex x meserveae); it is rated hardy to USDA zone 5, which roughly translates into zone 6 for Canada. Given that it is borderline hardy in Montreal, I would situate the plants in the most sheltered areas of your garden. For example, the front yard close to the house would be an option, in order to take advantage of any potential micro-climates there (e.g. the area next to the foundation of the house, especially the south-west corner, would be warmer than the rest of the garden). Here is a useful fact-sheet on the Meserve hybrid holly and its cultural requirements. You would have to plant both a male and female to get the beautiful red holly berries.

If you want red berries in winter and don’t mind bare branches, then you should definitely consider the winterberry holly (Ilex verticillata). It is native to Quebec (among other provinces). Here is a fact sheet from the Canadian Wildlife Federation for more information.

When it comes to yew (genus Taxus), you have many more choices. There is the noble English yew (Taxus baccata), the hardy Canadian yew (T. canadensis), the lovely Japanese yew (T. cuspidata), and the ubiquitous hybrid yew (T. x media), with their respective cultivars offering a wide range of sizes and shapes. Yews are tolerant of both full sun and full shade. They prefer a cool, moist, and slightly acidic soil, and are not drought tolerant. Generally they are pretty robust, adaptable plants and should be fine in both your front and back yards.

Late fall is not an ideal time to plant yews—they really need more time to grow their roots to prepare for winter. The specimens still available at nurseries this late in the season are likely stressed and not in good health. In spring, you will find a wider selection and healthier plants that will adapt to your garden faster once planted. We wish you the best of luck with your yews and hollies.