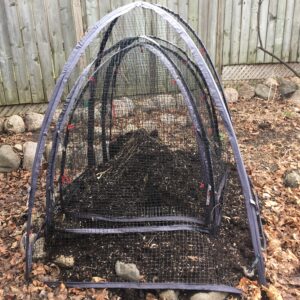 With the exception of a couple of watering and location issues, the vegetables – tomatoes, peppers, cucumbers, lettuce, various herbs, beans – all did quite well. We did not seem to have any significant, disease, blight or pest issues, nothing that we had to treat for.

We’re assuming that we will have to purchase some soil, compost, fertilizer, etc. however, we’re wondering if we can re-condition last year’s soil and fold it in with the new. We’re trying to keep costs down.

Do we need to worry about sterilizing the soil and if so, what should we do? There’s a lot of soil so oven or microwave cooking would be a huge chore but not impossible if necessary. I am interested in whether solarization is something that we should look at considering or if it even works in this climate. As of now, we have an empty greenhouse so it would be easy to fill bags of soil and put them in there until May.

Any information you can provide would be very helpful.

Thank you and cheers,

Hello and thank you for writing TMG with your question.

Yes, you can reuse your potting soil from last year. If you had had any disease problems, I would say no. Solarization of the soil is a good first step. Even in pots with healthy plants, weeds, insects or mild pathogens may be living in potting soil that has been previously exposed to the elements. Soil pasteurization can help. Baking in a 200 degree oven or microwaving will safely sterilize soil, but causes a bad smell that lingers I’ve heard, and over-drying may impact its ability to adequately retain water. Solarization will offer the same results without the hassle. To solarize container soil, place in a black plastic bag or in covered five-gallons buckets and place in a sunny location for four to six weeks to kill off these unwelcome elements and prepare the soil for new plants.

Much  of the nutritional value of the recycled potting soil was leached away last season. Replenish these lost nutrients after solarization by adding new potting soil and manure or compost. Because compost/manure are dense, it can lead to compaction and should be used judiciously in containers (a ratio of one part compost to three or four parts new potting soil is good). I would use a 50:50 ratio of reused potting soil to amendments. Reusing potting soil is a money-saver, but nutrition loss can be a concern even when revitalized. When reusing soil, consider using the recycled soil for plants that do not require rich soil to thrive. Tomatoes, for example, are heavy feeders and are a bit disease prone, so they may do best in all new potting soil.

Vermicompost, aka worm poop, is a lightweight, nutritionally balanced additive (approx. equal (N) nitrogen, (P) phosphorous, and (K) potassium) that I prefer for containers. You could start a worm bin and make your own. Add more fillers such as coir (coconut husk fibre), grit, or perlite if the mix feels too heavy. Slow-release fertilizers are also good additives that won’t weigh down the mix. I often add kelp meal by the handful to help plants deal with the stresses of container life as well as crushed eggshells, which add both calcium and act as grit, and fishmeal for nitrogen and healthy leaf growth.