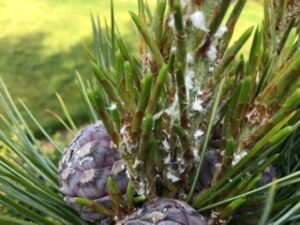 According to the North Carolina Forest Service, natural enemies such as parasitoid wasps and green lacewings usually keep woolly pine scale populations in check.  Significant feeding by the insect can cause some branch die back and stunted shoot growth. It can also stress or weaken the tree, making them more susceptible to other pests. It has been observed that woolly pine scale populations increase when there is insecticide applications that negatively impact their natural enemies.

A bi-product of woolly scale is sooty mold fungi.  This grows on the sweet and sticky waste product produced by the scale. The fungus itself does not hurt the tree, although it often attracts ants and wasps which is more of a nuisance than anything.

Woolly scale typically is not a major threat to overall tree health and the damage is mostly cosmetic.  No control is generally recommended for this insect.  If you would like to read more about this, the US Department of Agriculture has a detailed leaflet which you can find here: http://dnrc.mt.gov/divisions/forestry/docs/assistance/pests/fidls/178.pdf