The city planted a lovely specimen Robin Hill Serviceberry late last fall. About 12 feet tall, lovely shape and lots of buds. Location: full sun, well-drained front garden. It bloomed nicely about 2 weeks ago, and now as the leaves are coming into their own, many of them have dark spots and are curled and discoloured. Is this “rust”? I’ve been looking at lots of different serviceberry’s in the neighbourhood (Leslieville) and haven’t seen this on them. I read that cool damp weather can bring this on, but does it mean that this particular specimen has a vulnerability, like other plants have with powdery mildew? Should I spray with something, or leave it and let it fight it out on its own?

Robin Hill is a variety of Amelanchier x grandiflora, which is also known as Apple Serviceberry. And apple serviceberries are, indeed, susceptible to rust, exacerbated by wet spring weather. However, the rust appears as brightly colored yellow-orange lesions on the leaves, not dark spotted, curled and discoloured leaves.

What you are describing sounds more like another disease, Fire blight, Erwinia amylovora.

Infected flowers, shoots, and leaves appear as blackened, shriveled, and water-soaked. This condition gives symptomatic tissues a “burned” appearance, hence the name fire blight. The “shepherd’s crook” seen below is a classic symptom. 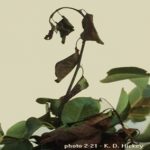 During spring and summer, prune out infected branches 8 inches below the damage. Avoid pruning when the plants are wet. Dip pruning tools in 70 percent isopropyl alcohol (rubbing alcohol) or 10 percent bleach solution (1 part bleach to 9 parts water solution) between each cut. Wash and oil shears when you are finished. These practices avoid spreading the pathogen.

Avoid heavy nitrogen fertilization, especially in summer, when succulent growth is most susceptible to fire blight infection. Avoid splashing water. Although chemical intervention will not cure the diseased tree now, next spring you can use a copper sulfate based product as a preventative, applied at the beginning of the bloom period and repeated as directed on the package.

Good luck controlling the disease on this lovely variety of serviceberry.