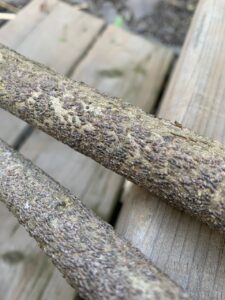 There is something (blight perhaps?) killing our well established backyard plants. There appears to be small bugs all over our Mandarin honeysuckle but it is still doing ok, but the lilac bush beside it barely came back this year ans there is something all over the bark. Photo attached. I just noticed this same thing is all over the bark of a bush that died last year, and starting to get on our box woods as well. Any idea what it is and more importantly, how to stop it?

I believe you may have an infestation of scale. If you can take a piece to your local Nursery they should be able to give you a definitive diagnosis.

Scales are sap-sucking insects that prey on most types of trees and plants. They are very hard to control and, because they resemble small bumps on twigs and branches, they can easily go undetected. There are 2 main types of scale – soft and armored (hard). Both groups use long, needle-like mouthparts to suck sap from the host tree or plant. A major infestation can kill a shrub or tree. Soft scale produce a sugary liquid called honeydew and they are usually larger than armored scales. The don’t have a shell, instead they secrete a cotton-like  substance over their bodies for protection. The coating is actually part of their body. Armored scale don’t produce honeydew, they are shaped like a flattened sphere and they have a hard shell. If you lift the hard coating there will be a small soft bodied insect inside. I think you have armored scale by the size of the bumps in the picture and because you didn’t mention the sugary liquid. It’s very obvious, drips all over everything underneath and attracts ants and a fungus called sooty mold.

During early growth stages, scales are called crawlers because they’re mobile. These six-legged insects are smaller than a pinhead. Adult scales become stationary and hide under the hard coating, feeding in one spot for the rest of their life.

I’ve never tried to treat scale outside, but I’ve had it on houseplants. It is impossible to ever totally get rid of on a particular plant. You can control it enough that the plant doesn’t die and will even flower. I rub off the bumps with an old soft toothbrush and clean up the honeydew. Eventually, I discard the plant. At some point in the life cycle the insects can fly weakly, so one infested plant will lead to others.

This link has a little more information:

If there are any trees or shrubs which you particularly care about, I would recommend getting an arborist or tree care company. Regretfully, any plants as infested as those in the picture, may need to be cut down and discarded. You can find a certified arborist at https://landscapeontario.com/